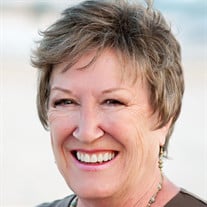 Angela M. Wallberg, 71, of Lake Villa, IL passed away on Monday, February 2, 2015. Angie was born in Guildford, England on June 14, 1943, the daughter of the late James and Mary Doe, and moved to the United States in the mid 1960's. She was an avid bowler and gardener and she greatly enjoyed Chicago sports. She was often heard reciting very specific details about the teams' players. Angie was also an active member of the Around the World group, an organization of women from all over the globe who settled in the United States. She is survived by her husband of 45 years, Bob; daughters Janis (Ronald) Paulson, Britt (Brian) Anderson, and Karin (Jim) Weidman; grandchildren RJ, Craig, Jonathan, Annika, Katelynn, Jayson, and Tyler; and by her siblings Judy (Gordon) Oliver and John (late Edna) Doe. Memorial visitation will be from 6-7 p.m. on Monday, February 9, 2015 at Ringa Funeral Home, 122 S. Milwaukee Ave. (Rte 83) Lake Villa, IL 60046. A memorial service will begin at 7 p.m. immediately following the visitation. In lieu of flowers, please consider a contribution in Angie's name to the Lake Villa Firefighters Association, PO Box 82, Lake Villa, IL 60046.

The family of Angela Wallberg created this Life Tributes page to make it easy to share your memories.

Send flowers to the Wallberg family.