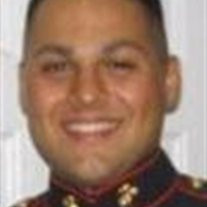 Antonio F. Trejo, age 25, passed away on Friday, August 2, 2013. Tony was born in Oak Park, IL on September 30, 1987. Tony graduated from Grayslake High School then enlisted into the United States Marine Corps where he attained the rank of Corporal. He served with the Crash Fire and Rescue Unit as an Aircraft Rescue and Firefighting Specialist for 3 years and 4 months out of Yuma, AZ. He was a combat veteran of the Afghanistan War and was honorably discharged in 2010. He currently was in the process of relocating to Odessa, Texas where he was employed in the oil industry. Tony had a huge heart and loved his family immensely. He loved his dog Gatlin, his many reptiles and most importantly the newest and greatest love of his life, his daughter Aria. He loved fishing, motorcycles, his Jeep, sharpshooting, hunting, anything adventurous, 'Merica' and the Corps. Tony always had a smile on his face, a tacky outfit, and a goofy act to follow. We will all miss "Freelove's" sense of humor, outlandish dance moves, crazy stunts, and loud announcements of his arrival. He is survived by his daughter, Aria; his fiancée, Rachel Younan; his parents, Martina (Rich) Williamson and biological father Antonio Trejo; his siblings, Giselle Williamson, Victor Trejo, Oliver Williamson, Alexis Trejo, Carl Szajek and Adelaide Williamson; his grandparents, Lorrie and Frank Wihtelich, and Hortencia Trejo. Also surviving is Grammy Jena and many aunts, uncles, nieces, nephews and cousins. He was preceded in death by his grandfather, Antonio Trejo, and pseudo Aunty Brenda Hendrickson. Visitation will be 4 – 8 pm on Friday, August 9, 2013, at Ringa Funeral Home, 122 S. Milwaukee Ave. (Rte 83) Lake Villa, IL 60046 (2 blocks south of Rte. 132/Grand Ave.) Funeral Mass will be at 10 am on Saturday, August 10, at St. Raphael the Archangel Catholic Church (847-395-3474) which is located on Rte. 173, ½ mile east of Rte. 45 in Old Mill Creek, IL. PLEASE GO DIRECTLY to the church on Saturday. Entombment will take place following the Mass at Resurrection Cemetery, Justice, IL with military honors presented. In lieu of flowers, please consider a memorial to Aria educational fund at http://www.gofundme.com/ForAria

Antonio F. Trejo, age 25, passed away on Friday, August 2, 2013. Tony was born in Oak Park, IL on September 30, 1987. Tony graduated from Grayslake High School then enlisted into the United States Marine Corps where he attained the rank of... View Obituary & Service Information

The family of Antonio F. Trejo created this Life Tributes page to make it easy to share your memories.

Send flowers to the Trejo family.