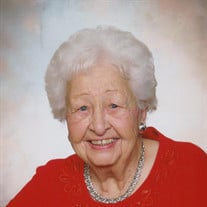 Armita Mae Mabie (nee Haney) passed away on the 1st of December 2014, aged 90. Born on Armistice Day, November 11th, 1924 to George and Delia Haney, she was raised with her 7 brothers in Janesville, Wisconsin. Armita was one of the nurses trained with the Cadet Nurse Corp in Janesville and was capped in 1946 and graduated in 1947. After World War II, she married F. James Mabie. They lived in Wildwood and Grayslake for over 50 years. Armita was employed as a nurse by the late L.R. Qualman. And many will remember her as the school nurse at Woodland School from 1970 to 1984. She later joined IL Bone and Joint in Gurnee (Lake Shore Orthopaedics) where she worked until her recent retirement on November 1, 2014. Armita enjoyed travelling across the USA with Jim during their marriage, her favourite place always being beside the sea. In her later years, she ventured further afield to Ireland and England where everyone doted on her iconic white hair. Always game for a new experience, Armita loved to join in with all the hustle and bustle of her family and became widely known to new friends and acquaintances as simply, Grandma Mabie. But Armita’s greatest pleasure was always being with her family and no family function was ever complete without her. This was not limited to the major holidays either. She supported all the activities and honours that they were involved in including Eagle Scout ceremonies, band concerts, softball games, and marching (wheelchair-rolling) in Chicago’s Pride Parade. The finest gifts she gave her family was her joy for life and a common sense approach to daily living. They will continue on with her lessons. She was truly a Woman for All Seasons! She was the beloved mother of Cindy (Bill) Bauer, Lynn (Fred) Lange, Judi (Tom) Yingling and Mary Lou (Chris) Claussen. Her spirit also lives in her 9 grandchildren: Jamie (Chris) Bauer-Spano, Jared (Cynthia) Lange, Jennifer Lange (Chad Wheelock), Andrew (Jennifer) Lange, Alisa Yingling (Dan Hammett), Charlie Yingling (Hector Jose), Sam Yingling (Lowell Jaffe), Zachary Claussen, and Laura Claussen (Alex Gorfin) and 4 great-grandchildren: Josephine Hammett Yingling and Christopher, Ryan, and Haley Mae Lange who all adored her. She was the beloved aunt of Jon (Marianne) Haney. She is preceded in death by the love of her life and husband of 56 years, Jim. Anyone who was lucky enough to know Armita will be familiar with the feisty spirit and loving generosity all bundled up in a tiny woman. We will never forget her perfectly manicured “directing” finger, her home-made cookies, or her glorious white hair and the authority that went with it. She will be missed by all. Armita supported nurses and nursing education all her life. Donations may be made in her name to Mercy Health Systems Nursing Scholarship Program, 903 Mineral Point Ave, Janesville, WI 53548 Visitation will be from 4 - 8 p.m. on Friday, December 12, 2014 at Ringa Funeral Home, 122 S. Milwaukee Ave (Rte 83) Lake Villa, IL 60046. Additional visitation hours from 9 - 10 a.m. on Saturday, December 13, 2014 at Prince of Peace Catholic Church. Mass will begin at 10 a.m. on Saturday, December 13, 2014 at Prince of Peace. Burial will follow at Avon Centre Cemetery.

Armita Mae Mabie (nee Haney) passed away on the 1st of December 2014, aged 90. Born on Armistice Day, November 11th, 1924 to George and Delia Haney, she was raised with her 7 brothers in Janesville, Wisconsin. Armita was one of the nurses trained... View Obituary & Service Information

The family of Armita Mabie created this Life Tributes page to make it easy to share your memories.

Armita Mae Mabie (nee Haney) passed away on the 1st of December...

Send flowers to the Mabie family.