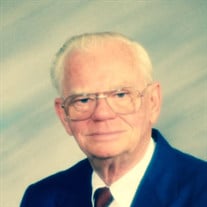 Axel Emil Swanson, 88, of Lake Villa, IL passed away on Wednesday, September 16, 2015 after a long battle with cancer. Axel was born March 29, 1927 in Chicago, IL, the son of the late Axel Swanson and Ida Nyman. He graduated high school in Little Rock, Arkansas where he was a member of the Sea Scouts, and then joined the U.S. Army during WWII. Axel came home from the war, graduated from the University of Wisconsin, and married Arline Bjugstad in 1950. He worked as a carpenter until he got his permanent job at Abbott Laboratories where he worked for 32 years and finished his career as a Senior Scientist in particulate matter. He was a 58 year resident of Lake County, living in Waukegan and Lake Villa and serving as a volunteer policeman in both towns. Axel was a charter member of St. Mark Lutheran Church in Lindenhurst, IL where he served as President of the Church Council. He was also an usher, participated in the Tuesday morning men’s ‘Handy Andys’ work group, and volunteered for the C.O.O.L. food pantry. Axel lived life doing what he loved: traveling, square dancing, and serving. He is survived by his wife Arline; children Gary Swanson of North Carolina, Karen (Tom) Madsen of Lake Villa, and Wendy (Tom) Lord of Antioch; granddaughters Sarah (Tom) Stuebner and Rebecca (David) Dillon; and by his great grandson Finnegan Stuebner. He was preceded in death by his parents and by his only sister Dorothy Hopkins. Visitation will be from 2 – 6 p.m. on Sunday, September 20, 2015 at Ringa Funeral Home, 122 S. Milwaukee Ave., Lake Villa, IL 60046. Funeral service will begin at 10 a.m. on Monday, September 21, 2015 at St. Mark Lutheran Church, 1822 E. Grand Ave., Lindenhurst, IL 60046. Additional visitation hours will be at church on Monday from 9 a.m. until the time of service. Burial at Warren Cemetery.

Axel Emil Swanson, 88, of Lake Villa, IL passed away on Wednesday, September 16, 2015 after a long battle with cancer. Axel was born March 29, 1927 in Chicago, IL, the son of the late Axel Swanson and Ida Nyman. He graduated high school in... View Obituary & Service Information

The family of Axel Swanson created this Life Tributes page to make it easy to share your memories.

Send flowers to the Swanson family.