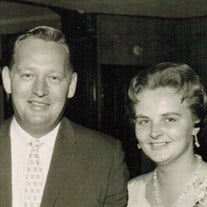 Barbara Davies, 83, passed away on Saturday, September 5, 2020. She was born in Maywood, IL on November 6, 1936, the daughter of the late Lewis and Emily Walquist. When she wasn't busy raising her seven children, she enjoyed cooking and baking,... View Obituary & Service Information

The family of Barbara Davies created this Life Tributes page to make it easy to share your memories.

Send flowers to the Davies family.