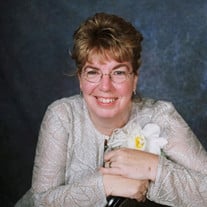 Betty Ann Yarnall, 69, of Lake Villa, passed away on Aug. 6 after battling dementia and Parkinson’s disease. She was born in Libertyville on June 21, 1952, to Hugh and Jean Myers. She spent her childhood in Wildwood, and graduated from Warren Township High School. It was in Wildwood that she met the love of her life, her next door neighbor Terry Yarnall. Betty and Terry were high school sweethearts, and married June 23, 1973. They recently marked their 48th wedding anniversary. Together they raised three children in Lake Villa, Jenni, Jamie and Joshua, who lovingly referred to their mom as “Momma Bear.” In addition to being a loving and devoted wife and mother, Betty was exceedingly intelligent, and received her bachelor's degree from Carthage College in 1975 and a masters degree from St. Xavier University in 2005, all while raising a family and working full-time. In 1991, she began working as a social studies teacher at Palombi Middle School in Lake Villa, where she remained for 24 years before retiring in 2015. The job suited her well, as Betty was a passionate history buff with an enthusiasm for General MacArthur. Always excited about education, Betty began working as a tutor at the Huntington Learning Center after retiring from teaching. Her other great passions included watching sports, of which she was extremely knowledgeable. Betty was a lifelong fan of Chicago sports teams, including the Cubs, Blackhawks and Bears. She enjoyed watching her son, Joshua, play hockey and her granddaughter, Paige, perform in equestrian events as well. She also liked going to the casino, even if it didn’t always work out in her favor, and she loved games of Michigan Rummy. Betty was highly creative and had a knack for sewing clothes. She made her childrens’ Halloween costumes annually, and she would also sew clothes for herself. She was a huge fan of the “Pirates of the Caribbean” series, and named her pet golden retriever, Jack, after her beloved Captain Jack Sparrow. Betty was an avid reader, especially books about history. Betty and Terry were tremendous pet owners, and shared their familial love with many dogs and cats throughout their decades-long marriage. Her greatest passion was her family, and she loved having the house full of family members, even when they would all be singing loudly and obnoxiously. She was a loving wife and cherished the moments when she would dance with her beloved husband. She was a devoted mother, and thought the world of her three children. She was the most caring grandmother, her three grandchildren were the light of her life. She was a proud and kind aunt, and her nieces and nephews will miss her greatly. She will be missed tremendously by her husband of 48 years, Terry Yarnall, and her three children, Jenni Yarnall, Jamie (Jim) Noffsinger and Joshua (Amelia) Yarnall. She was “Grams” to her three grandchildren whom she adored, Paige Pickens, Blaine Pickens and Evelyn Yarnall, and to whom she was also known as “Little Betbet.” She is also survived by her two sisters, Nancy DeVore and Paula (Jeff) Martin, along with numerous brothers and sisters-in-law, and many nieces and nephews. She was preceded in death by her parents, Jean and Hugh Myers and her brother-in-law, William DeVore. There will be a memorial service celebrating her fun-filled life on Aug. 13 at Ringa Funeral Home 122 S. Milwaukee Ave. Lake Villa, from 12-3 p.m. In lieu of flowers, the family is asking for donations to be made to the Alzheimer’s Association, 225 N. Michigan Ave., Floor 17, Chicago, Ill. 60601.

Betty Ann Yarnall, 69, of Lake Villa, passed away on Aug. 6 after battling dementia and Parkinson&#8217;s disease. She was born in Libertyville on June 21, 1952, to Hugh and Jean Myers. She spent her childhood in Wildwood, and graduated from... View Obituary & Service Information

The family of Betty Ann Yarnall created this Life Tributes page to make it easy to share your memories.

Send flowers to the Yarnall family.