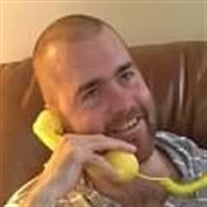 Bret M. O'Brien, 37, of Grayslake, IL passed away on Wednesday, July 23, 2014. He was born in Park Ridge, IL, the son of Michael and Linda O'Brien. Bret spent his boyhood years in the northern suburbs, graduating from Lake Forest High School and then attending college at the University of Missouri. As a young man, Bret invested much of his time reading about world history. An avid historian, he believed that only in understanding our past could we change the future. Bret was also well known for his kindness to animals and spent many years caring for his cat Smokey and his three chihuahuas Jasmine, Ariel, and Belle. His gentle nature, compassion for all living things, and fierce loyalty were apparent to all who knew him and he will forever be missed by his family and friends. Bret is survived by his parents Michael O'Brien and Linda O'Brien and stepfather H.K.; siblings Blake (Rebekah) O'Brien, Caitlin O'Brien, and stepbrother Bluey; maternal grandparents Robert and Mary Ellen Muskat; niece and nephew Maeve O'Brien and Blake O'Brien; very dear friend Veronica and many aunts, uncles, and friends. He was preceded in death by his paternal grandparents William and Coral Edith O'Brien and by his uncles David O'Brien and Michael Madock. A memorial visitation will be from 9 - 10 a.m. on Saturday, August 2, 2014 at Prince of Peace Catholic Church, 135 S. Milwaukee Ave (Rte 83) Lake Villa, IL 60046; 847-356-7915. A memorial Mass will begin at 10 a.m. on August 2, 2014 at Prince of Peace Church. In lieu of flowers, Bret's wish was to have friends and family donate blood in his name to Lifesource or to the American Red Cross.

The family of Bret M. O'Brien created this Life Tributes page to make it easy to share your memories.

Send flowers to the O'Brien family.