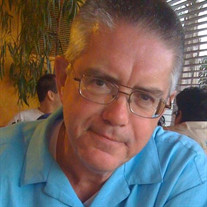 Bruce Melvin Hinton, age 66, of Lindenhurst, IL, died on Tuesday, August 5th, 2014. Bruce was born July 24, 1948 in Louisville, Kentucky to Bernard and Vivian Hinton. He attended Flaget High School and graduated from the University of Louisville Speed School of Engineering, where he received the 1997 Professional Award in Engineering. He lived all over the world from Kentucky to Ohio, California, Georgia, England, Germany and Connecticut before settling in Chicago. Bruce was a world traveler and visited over 40 countries. He ventured to far off places such as Russia, Europe, China, Tibet, Africa, South America, Japan and South Korea. He worked in several leadership positions for nuclear engineering companies such as B&W, Combustion Engineering, Impell, ABB and Westinghouse until retiring in 2010. Bruce was an avid golfer, aspiring gourmet chef, Honorable Colonel of the Commonwealth of Kentucky, but most importantly a loving husband, father, and Papaw. Survivors include his wife Pamela Hinton, his sister Marcia (Chris) Zinser, uncle Vern Clausnitzer, sons Brett (Brooke) Hinton and Chad Hinton, and grandsons Jaylen and Wilder Hinton. A visitation will be held from 4 - 7 p.m. on Wednesday, August 13, 2014 at Ringa Funeral Home, 122 S. Milwaukee Ave. (Rte 83), Lake Villa, IL 60046. A funeral service will begin at 7 p.m. on Wednesday at the funeral home with Rev. Garth Warren officiating. Cremation rites and interment of Bruce’s cremated remains will take place privately. Please consider a donation in Bruce’s memory to a charity of your choice. For more information, please visit www.RingaFuneralHome.com or call 847-356-2146.

The family of Bruce Hinton created this Life Tributes page to make it easy to share your memories.

Send flowers to the Hinton family.