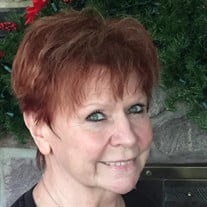 Cathie L Derer McCue passed away on Friday, March 26, 2021. She was born October 10, 1945, in Chicago, IL, the youngest child of Joseph George Derer and Louise Margaret (Theisen) Derer. The family lived in Wauconda, IL, where she attended school and graduated from Wauconda High School in 1963. As a young girl, she fell in love with ballet, took numerous classes, and, at the age of 14, herself began teaching dance. In her early 20’s, Cathie danced with an Adage team of a New York City ballet company for several years, then returned to Wauconda, IL, to open her own studio. Later she moved her studio to Lake Zurich, IL. On August 13, 1977, Cathie married Thomas E McCue, and they made their home in Mundelein, IL. She continued to operate Derer Academy of Dance in Lake Zurich until the couple moved to Lake Villa, IL, where she opened a third studio in the early 80’s. After 20 years of dance, Cathie discovered Pilates as a way to aid her students in optimal performance and, 1200 hours of rigorous training later, became one of less than 200 certified Pilates instructors in the country. Soon, she realized that Pilates could benefit not just dancers and so began teaching the method both as a rehabilitative and a proactive health measure to a wide variety of students. She later added Craniosacral therapy to her repertoire. Over more than 60 years, “Miss Cathie,” as many of her students fondly referred to her, was teacher, counselor, life mentor, and second mother to hundreds of girls, young, and not-so-young women and men. A person of amazing energy and perseverance, she was habitually cheerful, generous, and freely gave of her time above and beyond work relationships. Her job was always more about service than employment, and she truly was a person who “in everything worked at it with all her heart, as working for the Lord,” to whom she regularly gave credit. Besides helping others to maintain healthy bodies, Cathie’s other passions included her pet macaw, Cooper, and her dogs, Gibbet and Smookie, with whom she worked on agility training. She also liked waterskiing, and spent many long hours on her gardens, particularly her roses. Cathie left this life for her new eternal one on March 26, 2021, at Condell Hospital in Libertyville, IL. She will always be remembered by the many who loved her as a strong, caring, and compassionate human being. Cathie is survived by her husband Tom McCue of Lake Villa, IL; her brother Gary J Derer of Dallas, TX; her brother-in-law Karl J Luomala of Waukegan, IL; her nieces Laura L Ricci (Stephen) of Hilliard, OH; Natalie A Rice (Michael) of Genoa City, WI; Tina M Neubeck (Michael) of Montgomery, TX, Haley Nicole Derer of Dallas, TX; her nephew Keith J Luomala (Carolyn) of Houston, TX; cousins Sandy Pangratz (Joseph) of Iron River, MI; Kim Schroeder (Michael) of Island Lake, IL; and Ronald Reader of Ocala, FL; as well as 13 great nieces and nephews and 5 great-great nieces and nephews. She was preceded in death by her parents, Joseph George Derer and Louise Margaret (Theisen) Derer, and her sister Sharon L Derer Luomala. May the memory of this wonderful woman be blessed. Visitation will be 3-7 p.m. on Monday, April 5, 2021 at Ringa Funeral Home, 122 S. Milwaukee Ave. Lake Villa, IL 60046. Funeral Mass will be at 11 a.m. on Tuesday, April 6, 2021 at Prince of Peace Church 135 S. Milwaukee Ave. Lake Villa, IL 60046. Please meet directly at church. If you plan to attend Mass, the church asks that you please pre-register using this link: https://www.signupgenius.com/go/cathiemccuefuneral Burial will follow at Windridge Memorial Park in Cary, IL

The family of Cathie Derer McCue created this Life Tributes page to make it easy to share your memories.

Send flowers to the McCue family.