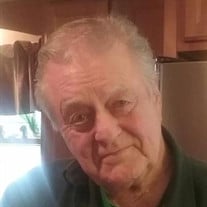 Charles J "Swabbie" Heffernan, passed away unexpectedly at home, on April 7. 2017, National Beer Day. He was born to Francis and Muriel (Ryan) Heffernan on February 3, 1938, in Pittsburgh, PA. Swabbie was a Navy veteran, serving at Glenview Naval Station. He later retired from Illinois Bell (Ameritech) after 36 years. He then delivered flowers for 22 years at Locker's Flowers in McHenry, IL. On December 3, 1998, he married Virginia (Lundblad), who believes he was truly her better half. He was extremely proud of his Irish heritage. He spent a beautiful, sunny, last day of life in the company of his beloved brother, Bill, aka Murray Burns, of Los Angeles. They re-visited their boyhood hometown of Glenview, and he enjoyed his final beer at Hackney's on Lake. Life was very good. Swabbie was best known for his sense of humor, sincere kindness, and his desire to "impart his wisdom" on anyone he could find to listen. He will be very dearly missed by so many. Swabbie wanted his loved ones to know he did the best he believed he could do, and that he loved them all unconditionally. Those surviving are his wife, Virginia; children Cindy (John) Nolan, Denise (Dennis) Morrison, twin sons Thomas Heffernan, and Timothy (Judy) Heffernan, step-children, Bob (Julie Waechter) Weber Jr., Stephanie (Darren Lyon) Weber, and Brett (Jamie) McCollum, grandchildren, Jennifer (Sarah) Dye, James Nolan, Collin Heffernan, Tony (Rachael) Koza, Kelli Koza, Trevor (Jenny) Glauser, Austin Weber, Alivia, Landon and Adalyn Lyon, Drew (Lisa) Tyler, Jacklyn Morrison, and Maddox Ackert. Great-grandchildren Kyla and Khloe, Anthony and Allanah, Sophia and Joey, and Jaxson. Siblings Bill aka Murray Burns (Planaria Price) ,Thomas Heffernan, Nell (Frank) Mayfield, and Martha (Thomas) Daly. He was preceded in death by his parents, daughter Tamara (Matt) Propst and by siblings Patrick Heffernan and Sheila Axon. Date to be decided for the sharing of pictures, memories and laughter in celebration of the life of Swabbie.

Charles J "Swabbie" Heffernan, passed away unexpectedly at home, on April 7. 2017, National Beer Day. He was born to Francis and Muriel (Ryan) Heffernan on February 3, 1938, in Pittsburgh, PA. Swabbie was a Navy veteran, serving at Glenview... View Obituary & Service Information

The family of Charles 'Swabbie' Heffernan created this Life Tributes page to make it easy to share your memories.