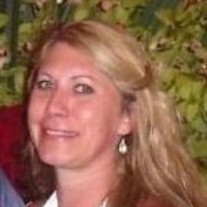 Charlotte “Char” Mikrut, 55, passed away in the early hours of October 31st, 2021, at her Lake Villa home, of natural causes. Char was born Charlotta Ann Carlson on November 11, 1965, in North Miami, Florida, to Inger and Curt Carlson. Raised in the Chicagoland area of Illinois, she graduated from Deerfield High School with the class of 1983, going on to study at Winona State University and Columbia College Chicago, where she focused on her passion for arts, studying Graphic Design. In 1988 and 1989, through her first marriage, she gave birth to her two sons, beginning her most beloved endeavor: being a mother. In 1996, she gave birth to her daughter, after marrying her second husband and bringing her stepchildren into the family. She later raised her three children as a single mother, also remaining family and dear friend to her stepkids throughout each of their adulthoods. Freelancing for many years as a graphic designer for advertising & marketing firms, she also worked several blue-collar jobs. In 2007, she met her soulmate, Tony, a Vietnam Veteran. They were married the next year, taking in each other’s kids as their own, and were together until his 2019 passing. Char was a mother and caretaker to her children and everyone brought under her roof, especially her own best friends. She cared dearly for her sister Helene and late brother Curt. She was a talented painter, sketcher, and muralist, which was her primary passion after being a mom. She participated in many school and town organizations, including the PTO for her children’s school districts and the committee for Lindenfest. Char had a passion for her Swedish heritage and was grateful to visit her family’s native country as a child. She was an advocate for Veteran’s rights, mental health, LGBTQ+ rights, and human equality. Charlotte is survived by her sons Shawn and Cody Hamel, daughter Mackenzie Andres, stepdaughter Kristy Andres, her sister Helene Carlson, her parents Inger and Curt Carlson, her extended family in America and Sweden, and her best friends. A visitation will take place on Tuesday, November 9, 2021, from 3:00 - 7:00 pm at Ringa Funeral Home 122 S. Milwaukee Ave. Lake Villa, IL

The family of Charlotta Ann Mikrut created this Life Tributes page to make it easy to share your memories.

Charlotte “Char” Mikrut, 55, passed away in the early hours of...

Send flowers to the Mikrut family.