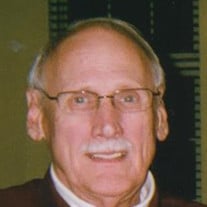 Curtis E. Johnson, 77, of Bristol, WI passed away on Wednesday, March 25, 2015. Curt was born on July 16, 1937, the son of the late Herman and Mary Johnson. He served for 6 years in the United States Navy and almost 30 years in the United States Naval Reserve. During his time in the USNR (while still employed full time with two children) he was highly commended for his superb service in a secret task group involved in antisubmarine warfare operations against Soviet submarines. Curt traveled all over the world while in the Navy Reserves (Turkey, Spain, Phillipines, Bermuda, Hawaii, Japan, Malta and many more.) Because of his height (6'7") he ended up in the Air Naval division flying the P3 Orion. Curt was a proud veteran and made frequent donations to the USO Curt was a huge Cubs fan. He loved to dance. He created a creative palindrome for his license plate, CURTRUC. Curt had a great sense of humor, loved to play cards and cribbage, and enjoyed westerns and Dean Martin roasts. He was employed for 52 years at Culligan. Curt's friends spanned many generations; he was friends with people of all ages. To all that met him, he was unforgettable. Curt is survived by his children Rhonda Johnson Perry and Eric (Beth Koch) Johnson, grandchildren Rachel Perry and Alyssa Perry, brother Herman 'Bud' Johnson, and by his Most Significant Other Shirley Wolff. He was preceded in death by his wife Bonnie Lee Johnson and by his brothers Wallace Johnson and Gerald Johnson. Visitation will be from 1 - 5 p.m. on Sunday, March 29, 2015 at Ringa Funeral Home, 122 S. Milwaukee Ave (Rte 83) Lake Villa, IL 60046. Additional visitation hours will be from 9 - 10 a.m. on Monday, March 30, 2015 at the funeral home. A funeral service with military honors will begin on Monday at 10 a.m. Burial will follow at Avon Centre Cemetery. As an expression of sympathy, memorial contributions may be sent to the USO. Tax-deductible donations to the USO can be made online at http://www.uso.org/donatelanding.aspx, by calling 1-800-876-7469 or by mail. Please send a check or money order made payable to "USO" to: USO Department WS PO Box 96860 Washington, DC 20090-6860

The family of Curtis Johnson created this Life Tributes page to make it easy to share your memories.

Send flowers to the Johnson family.