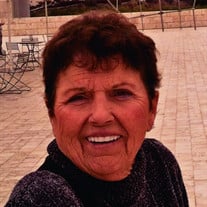 Darlene “Dolly” Hoffman passed away July 21, 2018 following a long battle with liver disease. Dolly was born in Waukegan, IL on January 6, 1944 to the late Sherman and Aileen Shepherd. Dolly worked at several industrial jobs until she became a cosmetologist and opened her own shop. After retirement, Dolly and her husband, Daniel lived in Mesquite, NV during the winter months and in Lake Villa, IL during the summer. Dolly loved life and had many interests including golf, bowling, boating, ATV riding through the desert, gambling, gardening, painting/drawing, sculpting with clay and going out to dinner with friends. Dolly is survived by her husband Daniel; her son Anthony Deegan; Daniel’s children Kathleen (Robert Sr.) Bullard, Mary Anne (Darren) King and Michael (Donna) Hoffman; grandchildren Thomas, Erika, Laureal, Tarrah, Robert Jr., Travis, Mila and Marlie; great grandson Abraham; sisters Carol and Phyllis and brother Robert; nieces and nephews Kelly, Ashley, John, Ryan, Jonathan, Jamie and Christopher. She was preceded in death by her sister Sherry and brother David. Memorial visitation will take place on Saturday July 28, 2018 from 10 am until time of service at 11:00 am at Ringa Funeral Home 122 S Milwaukee Ave. (Route 83) Lake Villa, IL. In lieu of flowers , please say a prayer for Dolly and remember how much joy she brought to everyone.

The family of Darlene "Dolly" Hoffman created this Life Tributes page to make it easy to share your memories.

Send flowers to the Hoffman family.