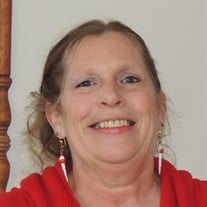 On the evening of Tuesday October 13, 2015 at approximately 9:00pm, Denise M. Pawlawski passed away unexpectedly in Beach Park, Illinois. She was 57 years old. Denise was born in Minneapolis, Minnesota on August 30, 1958. She was the third child, and only daughter, of Viola F. VanderVries and Albert Hood. Denise was a homemaker who enjoyed listening to all types of music (the Eagles were her favorite band), crafting, and spending time with friends and loved ones. She was always quite sociable and quickly obtained the nickname “Chatty”, as in Chatty Cathy. She would talk to anyone anywhere, she simply loved being around people, telling stories and laughing until it hurt. She would frequently say that “she lost 10 pounds” when in fits of laughter. She was a gracious hostess, always offering food and beverages to anyone who stopped by, whether they were a friend, family or someone who came by to perform some service in the home. She was a kind woman with a big heart and was always available to anyone, whenever they needed her. She always wanted to help however she could. Denise enjoyed being a grandmother, or “Grammie” as she was named. She loved it more than words can describe. Although her health did not allow her to be as active as she would have liked, she treasured every moment spent with her grandson, Kory, and spoke of him often. Denise was preceded in death by her husband Kory Pawlawski, sister in law Kay Hood, brother Stephen Hood and parents Viola VanderVries and Albert Hood. Denise is survived by her daughter Korina (Austin) Daley, grandson Kory Daley, brothers Mark and Dean Hood, companion William Adams, and nieces Allison and Stephanie Hood. Visitation will be from 1 - 3 p.m. on Sunday, October 18, 2015 at Ringa Funeral Home, 122 S. Milwaukee Ave. Lake Villa, IL 60046. A memorial service will begin at 3 p.m. Sunday at the funeral home.

On the evening of Tuesday October 13, 2015 at approximately 9:00pm, Denise M. Pawlawski passed away unexpectedly in Beach Park, Illinois. She was 57 years old. Denise was born in Minneapolis, Minnesota on August 30, 1958. She was the third... View Obituary & Service Information

The family of Denise Pawlawski created this Life Tributes page to make it easy to share your memories.

Send flowers to the Pawlawski family.