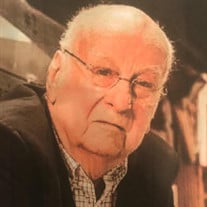 Donald Martin Hjortland, beloved husband, father, grandfather, great-grandfather, brother and uncle was born in Kalamazoo, Michigan, on December 22, 1928 and died December 23, 2018, in Naples Community Hospital, Naples, Florida. He died of heart complications peacefully surrounded by his family having just celebrated his 90th birthday. At age four, upon his mother’s death, Donald, his sister, and father moved to Beloit, Wisconsin to live with his maternal grandparents where he lived until his father married Alice Miller of Janesville, Wisconsin. They moved to Long Lake, Illinois in 1937 which was his principal residence until his death. Donald was a lifelong ham radio enthusiast with call numbers W9ZJR. His membership to the American Radio Relay Club allowed him to establish connections with other ham operators all over the world. At the same time, he started a radio repair business, working on the huge old tube radios. He was always proud that he became a businessman employing other young men at age 15. At the same age, he started flying lessons and earned his pilot’s license at 16 the youngest age permissible. Donald attended Grant High School in Fox Lake, Illinois. He was captain of the boxing team, a sport he pursued in college. Upon graduation from Grant High School, he attended St. Olaf College in Northfield, Minnesota, for two years. In the pursuit of his passion for flying, he would often rent a small plane in Northfield to fly home to Long Lake for a visit. In winter he would land on the lake’s frozen surface creating quite a stir. He transferred from St. Olaf to Purdue University in Lafayette, Indiana, where he was a member of the Beta Sigma Psi Fraternity. His fraternity awarded him the nickname Radar because of all the radio antennae on his car. During his time at Purdue he won the boxing championship and graduated with a degree in Metallurgical Engineering in 1951. After graduation, he went to work for the Potter Company in North Chicago, Illinois, where he developed radio noise filters for military aircraft. He served in the army in El Paso, Texas, teaching the RCAT system the entire time. After the Army, he went to work for his father at The Steel Supply Company, a steel warehouse, in the Chicago suburbs. He became president and worked there until the end of his life. Early on he added a machine shop, Caliber Engineering, within The Steel Supply Company with Russell Wertke. In 1966 he started Precision Chrome a hard chrome plating company with Albert “Bud” Busscher in Fox Lake, Illinois. In addition to his career in the Steel Industry, he proudly served on the Board of Directors at MB Financial Bank in Morton Grove for a number of years and was a member of MENSA his adult life. Throughout his life he was an avid pilot, flying his Piper Aerostar for business as well as pleasure. He eventually learned to fly a helicopter and flew his Robinson 22 to work during which he turned a frustrating hour of driving into a joyful 15 minutes of flying. He was also a member of AOPA. His other interests were sailing in the Caribbean and on Long Lake where he was a member of the Long Lake Yacht Club. He rode motorcycles and was a member of a motorcycle club named the Streeterville Scramblers of Chicago. He traveled with that group both nationally and internationally. He spoke fluent Spanish and for the last 20 years spent every September in Nerja, Spain. He is preceded in death by his father Martin Olai Hjortland; his birth mother Cecelia nee Gosline; his beloved step-mother, Alice Leora Miller of Janesville, Wisconsin; his daughter Marcie Hjortland his sisters: Marceil Naidenovich Pleis (Skip), Sondra Hjortland Dose (Richard), and Bonnie Newman Uyttebroeck (George). He is survived by his spouse Margaret Cronin Hjortland, and his previous wife, Wilma Jeanne Hanlon; his daughter Cheryl Hjortland Preece (Roy, deceased); son Donald (“Skip”) Owen Hjortland (Kristen Laxgang); stepdaughter Cassandra Anne Teschner McKeen (Brian); stepson John Stephen Teschner (Deborah Prespare); his sister Kristi Hjortland Bertolette (Michael); brother Martin Jon Hjortland (Cindy); four grandchildren, seven great grandchildren and many loving nieces and nephews. Visitation will be held on Saturday, January 19, 2019, 10:00 am with a service to follow at noon at Ringa Funeral Home, 122 South Milwaukee Avenue, Lake Villa, Illinois 60046. In lieu of flowers, donations may be made to Trinity Evangelical Lutheran Church, 25519 West Illinois Route 134, Ingleside, Illinois 60041 and/or The Long Lake Improvement and Sanitation Association, PO Box 175, Ingleside, Illinois 60041. To read more memories, follow this link https://goo.gl/TVRnfo.

The family of Donald Martin Hjortland created this Life Tributes page to make it easy to share your memories.

Send flowers to the Hjortland family.