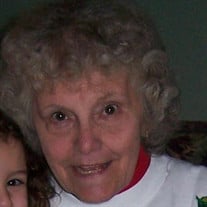 Doris M. Orr, 85, of Lindenhurst, IL, formerly of Northlake, IL, passed away at her home at Victory Lakes Assisted Living Center on Saturday, January 3, 2015. She was born in Chicago, IL on May 21, 1929, the daughter of the late Florence and Ernest Herzog. Doris graduated from Taft High School in Chicago and married her late husband Bob on May 20,1950. A resident of Northlake for most of her adult life, she moved to Lindenhurst 3 years ago to be closer to her family. She was a longtime member of Northlake Lutheran Church where she was active in the Altar Guild and a member of the church choir. Doris’s professional career was in banking were she worked for the Corus Bank in Northlake. She was especially proud of the fact that she was able to successfully master the rapidly evolving computer innovations that were taking place during her years of employment. During her leisure time she enjoyed knitting and piano playing. Doris and her husband extensively traveled and especially cherished the trip to her ancestral homeland in Heidelberg, Germany in 2000. She is survived by her children, Kathy (Michael) Shelley of Lake Villa, Keith (Erika) Orr of Michigan, and Karen (Tom) Tischhauser of North Barrington. Her grandchildren, Katie (Rob) Hiles, Matt (Jenny) Shelley, Mitchell Shelley, Jason Orr, Nicholas Orr, Danny Orr, Sara Tischhauser and Megan Tischhauser; her great grandchildren, Quinn Hiles and Paige Hiles; and her siblings, Lois Boren of Indiana, Ernest (Terry) Herzog of Romeoville and Carol Herzog of Chicago. She was preceded in death by her husband, John Robert ‘Bob’ Orr and her sister, Susan Herzog. Funeral services will be held on Tuesday, January 6, 2015 at 1 pm at RINGA Funeral Home, 122 S. Milwaukee Ave. /RTE. 83, in Lake Villa, IL with Rev. Terry Breum officiating. Cremation rites will be accorded after the service with private family interment at a future date. Visitation will be held at the funeral home also on Tuesday, beginning at 11:30 am and continuing until the time of service at 1 pm. Please consider, in lieu of flowers, a memorial of your choice to honor and remember our Mom.

Doris M. Orr, 85, of Lindenhurst, IL, formerly of Northlake, IL, passed away at her home at Victory Lakes Assisted Living Center on Saturday, January 3, 2015. She was born in Chicago, IL on May 21, 1929, the daughter of the late Florence and... View Obituary & Service Information

The family of Doris M. Orr created this Life Tributes page to make it easy to share your memories.

Send flowers to the Orr family.