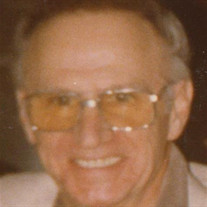 Edward J. Caraher, Sr., 89, a 57 year resident of Lake Villa, IL passed away on Thursday, June 16, 2016. He was born in Chicago, IL on December 30, 1926. He served in the Marines in World War II and upon his return, he worked for Sears Roebuck and Co. He married Lol, his "girlfriend" in 1953 and moved to Lake Villa in 1958 and established their home and family. He owned and operated a nursing home in Lindenhurst then went to work as a custodian for WJ Murphy School in Round Lake. He was beloved by staff and students alike - known to all as "Mr. Ed." Ed was an avid bowler and served as an officer in many leagues at Antioch Bowling Lanes. He loved playing golf, cards, gardening, dancing (especially the jitterbug), singer Barbra Streisand and the St. Louis Cardinals. He is survived by his wife of 62 years, Olga “Lol,” children Kim Radcliff, Kevin Caraher, and Kerry (Brian) Pollard, grandchildren Tina Radcliff, Gayle (Nathaniel) Syme, Josh Pollard, and Riley Pollard, great grandchildren Jayce Radcliff and Sawyer Syme, and by his brother Bernard Caraher. He was the best dad, grandpa/grampy and great grandfather/pappy and we will all miss him immensely. He was preceded in death by his son Edward Caraher, Jr., four sisters, and one brother. Visitation will be 2 – 6 p.m. on Sunday, June 26, 2016 at Ringa Funeral Home, 122 S. Milwaukee Ave. Lake Villa, IL 60046. A funeral service will begin at 10 a.m. on Monday, June 27, 2016 at the funeral home. Burial with military honors will follow at Ascension Cemetery.

The family of Edward Caraher, Sr created this Life Tributes page to make it easy to share your memories.

Send flowers to the Caraher family.