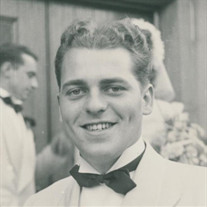 Edward William Peterson, 91, of Salem, WI, passed away Thursday, July 2, 2015 at his home. He was born August 4, 1923, in Chicago, IL, to the late Axel and Anna (nee Gustafson) Peterson. Edward married Grace (nee Leone) Peterson on August 20, 1949, in Chicago. Edward served in the Army Air Force for 3 ½ years and upon returning to the States, studied Industrial Design at the Art Institute of Chicago. Entering the profession after college, he ultimately became an executive with the Raymond Loewy organization in Chicago. From there, he became senior VP and part owner at Design Consultants, Inc., and finally established his own firm doing boat and product design, graphics and architecture. Notable achievements included creating exhibits at the Museum of Science and Industry in Chicago. Edward was an avid sailor, sports car enthusiast, and enjoyed model railroading. In addition to that, he designed many homes, one of which was featured in Better Homes and Gardens magazine. He remained active in the political process until his last days. In order to create change in this country, he felt it was his duty to make his thoughts known by writing to our President and Senators on a regular basis. Many of his articles were published in local papers. Edward was deeply devoted to his wife, whom he visited every day at the nursing home, regardless of his own physical limitations and inclement weather. He had a great love for his children, as well, and will be dearly missed by them. Survivors include his wife, Grace Peterson of Salem; his children, Brian Peterson of Lake Forest, Neal Peterson of Winnetka and Jane Nischan of Antioch; his brother Robert (Helen) Peterson of Elk Grove; his grandsons, Matthew Nischan of Chicago and Ted Nischan of Colorado; sisters-in-law, Ange Swenson of Niles and Marge Moreth of Plainfield; and severalnieces and nephews. In addition to his parents, Edward was preceded in death by his sister, Betty, who died at the age of 2 ½. On Saturday, July 18, all are invited to a memorial visitation from 10 am – 12:30 pm at Ringa Funeral Home, 122 S. Milwaukee Ave, Lake Villa, IL 60046 with a prayer service at 11:45am. Father Tim Fairman will be the presider. Inurnment will be private. In lieu of flowers, memorials in Edward’s name may be made to VITAS Community Connection, c/o VITAS Innovative Hospice Care, 2675 North Mayfair Road, Suite 500, Wauwatosa, WI 53226. You may leave online condolences for the family at www.ringafuneralhome.com, or call 847-356-2146 for information.

The family of Edward William Peterson created this Life Tributes page to make it easy to share your memories.

Send flowers to the Peterson family.