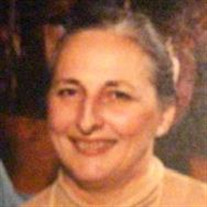 Eleanor Florence Bush of 93 years, born on September 16, 1926, passed away peacefully in her home, surrounded by loved ones on October 8, 2019. Married to Clinton C. Bush, b. 1926 d. 1984. She was a unique and wonderful woman, wife, sister, mother, grandmother, great-grandmother and beloved Aunt. She taught us all about strength, resilience, and perseverance. She had a feisty, creative attitude and was never afraid to share her opinions. She lived with her daughter, René Powers and her son-in-law Jeff Powers in Round Lake Beach, IL. Eleanor is survived by another daughter, Suzanne French and her husband Brian French. Her son Robert Bush and his wife Vita-Jean Bush. Eleanor is survived by a sister, Cherie Michelkamp and husband, Frank Michelkamp. No longer living are her daughter Holly Bush b. 1950 d. 1994 and son David Bush b. 1960 d. 2016. No longer living is her brother, Stanley Edward Ternstrom b. 1928 d. 1969. Eleanor also is survived by her grand-children Marcy Marttila, Steven French, Liz Huhnstock, Nanette Barabasz, Natalie Hoyt, Erika Labutka. Great grand-children, Taylor Knight, James Paschky, Madeleine Paschky, Benjamin Labutka, Sienna Domenech, Lily Hoyt, Gillian Labutka, Grayson Hoyt. Eleanor impacted and touched many lives in her 93 years. Eleanor (Auntie Sis) will be loved and dearly missed by all. In honor of Eleanor, we will be hosting a Celebration of Life event on November 2, 2019. More information will be provided via FaceBook at a later date.

The family of Eleanor Bush created this Life Tributes page to make it easy to share your memories.

Send flowers to the Bush family.