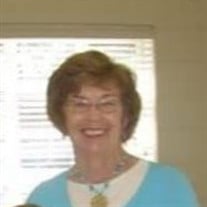 Elizabeth Louise (nee Meyer) Fitch passed away peacefully at home on August 22nd at the age of 89. She was born in Chicago on April 1, 1932 to Forest and Elizabeth (Fedosky) Meyer. In 1945, they settled into a more rural life in the town of Chesterton in Northwest Indiana. She was preceded in death by her second husband, Logan Fitch of Chicago and brother William (Frances) Meyer of Chesterton. She is survived by her children Ian (Barbara) Griffith and Alison Gail Griffith; three (3) grandchildren: Jason (Cristina) Griffith, Michael Norris, and Sophia Griffith; and four (4) great-grandchildren: Gabriel, Olivia, Breanna and Isabella Griffith. To many she was known as Liz, but to her family and friends in Indiana, she will always be remembered as Betty. After graduating from Chesterton High School in 1948 she took the road less traveled by taking a gap year. While not a common practice at that time, she worked that year saving money to attend her preferred choice of DePauw University in Greencastle, Indiana. After graduation, she married her first husband, Jim and lived in Glenview, Illinois for more than 30 years. She enjoyed raising her children and working part-time as an editor of a medical magazine. She continued higher education and eventually earned a Master’s Degree in English from DePaul University in Chicago. Marrying for a second time to Logan, they enjoyed many trips around the United States and internationally. After Logan’s passing, she continued her world travels, totaling five (5) continents, at least twenty (20) countries, and thirty-five (35) states. Her lifelong passion for travel developed at a young age and she spent several college semesters as an exchange student in England. This love of England, Wales and Ireland manifested itself in 3 additional trips (including chaperoning Ian’s high school choir trip). Her college time would also be when she picked up another lifelong passion; long walks in the woods and hills (moors). Another of her passions was volunteerism. Well beyond age 87, she was walking as Trail Patrol Guide at The Morton Arboretum. With her love of art, she helped organize the Chesterton (Porter County, Indiana) Art Fair and was a docent at the Art Institute of Chicago for many years. In addition, she enjoyed volunteering with children as a weekly in-classroom reader at Chicago’s Cabrini Green public housing. She taught English as a second language in Northwest Indiana. One of her greatest joys was delivering books from the Lombard Public Library to her “old people” (those that were homebound). An avid reader, jigsaw and crossword puzzler, she was always up-to-date on the latest current events. Her devotion to Chicago’s White Sox and Blackhawks was unmatched. Her motto was one that she borrowed from her father, “A good day, the White Sox win. A great day, the White Sox win and the Cubs lose. And the best day is when the White Sox win a doubleheader and the Cubs lose a doubleheader.” When either team was doing well, but then hit a rough patch she would qualify that losing skid with, “I guess that they cannot stand their own prosperity.” As a baking enthusiast she delighted (and spoiled) her family and friends with beautifully decorated homemade cookies, cakes, and pies, which will be sorely missed at each gathering. Liz had a generous spirit and a gift for tending to those around her, human, plant, or animal; all were doted on. Liz was vibrantly active throughout her life, and actively made a difference to all. A memorial service will be held for Elizabeth Fitch at St. Mark Lutheran Church, Lindenhurst, IL. Saturday September 18, 2021 10-11am Visitation 11-11:45am Service 12-1pm Buffet luncheon St Mark Lutheran Church 1822 E. Grand Avenue Lindenhurst, IL 60046-7821 https://www.smlc.info/contact-us/#Location Memorial contributions can be made to the Morton Arboretum Library in Lisle, IL. https://mortonarb.org/explore/sterling-morton-library/#

Elizabeth Louise (nee Meyer) Fitch passed away peacefully at home on August 22nd at the age of 89. She was born in Chicago on April 1, 1932 to Forest and Elizabeth (Fedosky) Meyer. In 1945, they settled into a more rural life in the town of... View Obituary & Service Information

The family of Elizabeth L. Fitch created this Life Tributes page to make it easy to share your memories.

Send flowers to the Fitch family.