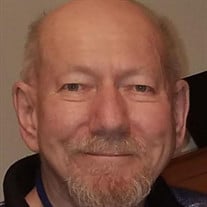 Emil Richard Szimeth, 70, was surrounded by loved ones when he passed away peacefully on November 5, 2021. He was born in Heidenheim, Germany and migrated to the United States with his family in 1958. Emil is survived by his wife of 49 years, Eleanor (Lorenz) Szimeth; children Cheryl (Jim) Evans, Valerie (Ed) Zawadzki, Melissa (Dan) Keith and Emil Andrew Szimeth; grandchildren Madison, Brooke, Abby, Taylor, Jackson, Isabelle, Lincoln; sister Beate Szimeth; nieces Miranda (Jeremy) VanWoerkom, Brenna (Adam) Weber; great-nieces and nephews Alexis, Xander, Sylvia, Olive, and many beloved family friends. Emil is preceded in death by his parents Emil and Maria (Gröschl) Szimeth. Emil grew up in Chicago, went to St. Alphonsus grade school where he was also a Catholic altar boy. He graduated from Gordon Tech High School and attended Wilbur Wright College. He also earned free tickets to Cubs games at Wrigley Field by helping clean the stadium. He began his career researching and conducting various medical experiments in a laboratory and pursued this interest as a successful medical equipment Sales Representative for over 40 years. Emil was a member of a Soccer Club and Donauschwaben German Club. Emil and Eleanor raised their family in Schaumburg, Illinois and enjoyed vacationing at their family-owned lake house in Wisconsin. A lot of time was spent at the lake house doing activities such as fishing, boating, water skiing, tubing, sailing, snowmobiling, downhill skiing, cross country skiing with family and friends. He enjoyed making fires, Sunday morning golf, afternoon barbeques, watching the Chicago Bears, playing poker, watching sunsets and he was a joker/prankster by heart, especially on April Fool’s Day. He looked forward to making his seafood gumbo every year for his family on Christmas Eve. He enjoyed traveling, especially cruises, with his favorite destination being Tahiti. Emil moved and eventually retired on the Chain of Lakes, in Lake Villa, Illinois where he was surrounded by wildlife and enjoyed daily sunsets. Emil was always a fighter. He battled and survived stage 4 lung cancer (2009), a massive heart attack (2016) and battled Alzheimer’s Disease for the last 5 years. His famous saying was, “Hold On! Take it easy, Take it easy”. Now, he can rest peacefully, pain-free and take it easy, in the arms of God. Visitation will take place on Thursday, November 11, 2021, from 4:00 - 8:00 pm at Ringa Funeral Home 122 S. Milwaukee Ave. Lake Villa, IL. Prayers will start at the funeral home on Friday, November 12, 2021, at 9:15 am going to St. Bede Church Mass 10:00 am. Everyone can attend the funeral mass via live cast on facebook.com/RingaFH. Burial will follow at Ascension Cemetery. If you would like to make a donation in Emil's name, the family wishes donations go to American Cancer Society https://donate3.cancer.org/ or Alzheimer's Association https://act.alz.org/

Emil Richard Szimeth, 70, was surrounded by loved ones when he passed away peacefully on November 5, 2021. He was born in Heidenheim, Germany and migrated to the United States with his family in 1958. Emil is survived by his wife of 49 years,... View Obituary & Service Information

The family of Emil R. Szimeth created this Life Tributes page to make it easy to share your memories.

Emil Richard Szimeth, 70, was surrounded by loved ones when he...

Send flowers to the Szimeth family.