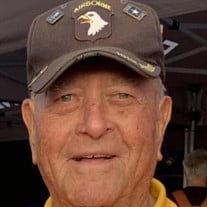 It is with great sadness that we announce the passing of Frederick William Popp Sr., husband of 64 years to the late great Arlyn Popp, on March 22nd, 2021. Fred passed peacefully in his home in Bonita Springs, Florida surrounded by his loving children Diane, Fred (Dale), Jerry (Julie) and Debby (Ron). He is also survived by his 8 grandchildren and 16 great-grandchildren. Fred was born on a small farm in Arlington Heights, Illinois. He loved his parents and the farm but always dreamed of something bigger. After high school, he started as a lineman with Illinois Bell and then volunteered to serve with the 101st Airborne Division at Camp Breckenridge, Kentucky. Fred was selected to play football in Schwabisch Gmund, Germany as well as to serve in the special honor guard which was greeting General Dwight Eisenhower to bid farewell to American troops stationed in Germany. Fred then headed to the Korean War before coming home at the age of 24 to marry Arlyn and settle in Lake Villa, Illinois. Once settled in Lake Villa, Fred and Arlyn started the wonderful family they had always dreamed of. Fred continued his work for Illinois Bell as a construction planner. He became a member of the Volunteer Rescue Squad and started a career in politics for the Lake Villa Township and Lake County. Those are just some of the details that shaped the strong, patient, loving, hardworking and above all else, live life your way person that Fred was. To know Fred, you had to know that you couldn’t go anywhere without him knowing someone. He had a style that was endearing to the people he met. He could tell a story and draw everyone in the room to listen. Fred loved NASCAR, golf, baseball, fishing, bowling, traveling and of course a strong Old Fashioned. In retirement, Arlyn and Fred would travel the United States in their motorhome, as well as enjoying annual golf trips to Spain, Jamaica and Hawaii. They would eventually grow new roots in Bonita Springs, Florida where they would make even more new friends, create new memories and play even more golf. They never missed a visit when grandchildren or great-grandchildren were born. The younger generations would affectionately call Fred “Boppy” and come to know “Boppy” for his love of sweets. Grandpa sharing stories over ice cream was always a great way to end a visit. There is no possible way to sum up the amazing 92 years that Fred lived before cancer eventually took his life. We love and miss you “Boppy” and promise to celebrate your life until the end of ours! Services were private.

It is with great sadness that we announce the passing of Frederick William Popp Sr., husband of 64 years to the late great Arlyn Popp, on March 22nd, 2021. Fred passed peacefully in his home in Bonita Springs, Florida surrounded by his loving... View Obituary & Service Information

The family of Frederick William Popp Sr created this Life Tributes page to make it easy to share your memories.

It is with great sadness that we announce the passing of Frederick...

Send flowers to the Popp family.