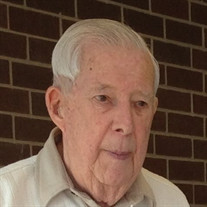 George Arthur Lexau, age 90, of Lindenhurst, died Wednesday, May 28, 2014 after a long illness. He was born April 9, 1924 in Chicago. The family moved to Long Lake, IL while he was still in elementary school. He was attending St. Olaf College when the U.S. declared war and joined the Navy as a corpsman in early 1942. He participated in landings in North Africa, Italy, and Normandy before finishing his service in the Pacific. He returned to Long Lake to marry the late Marion Wallace, October 30, 1948 at Trinity Lutheran Church where they were members until her death. They were happily married for 29 years and enjoyed traveling the country. They had 3 daughters, Christine, Linda and Janet. George was Vice President of Ideal Cabinet Company of Chicago and Wheeling his entire career. He served several terms on both the church council and the Gavin School Board. He married LaVerne Egerter on September 24, 1980 on Washington Island. They lived in Gurnee, later moving to Lindenhurst and joining St. Mark’s Lutheran Church. He is survived by his wife of 33 years, LaVerne, his daughters Linda Reiff of Oshkosh and Janet (Marty) Padilla of Gurnee; grandsons Jacob (Jaclyn) Reiff, Mark Reiff and Tim (Danielle) Reiff; great grandsons Ethan, Brett, Luke and Trevor Reiff; sister Ruth Lexau; step-daughter Dyane (William) Elia and step-grandchildren, Julie Elia, Michael Egerter, Miriam Elia and Josh Elia; nieces Barbara Schipke, and Vicki Walliser Simpson, nephews Carl (Sue) Walliser and Andy Walliser, and numerous grand -nieces and nephews. He was preceded in death by his parents Hoiden and Helga Lexau; his first wife Marion; his daughter Christine Lexau; his brother Harold Lexau and his nephew John Lexau. Visitation for family and friends will be held from 4 – 7 p.m. on Thursday, May 29, 2014 at Ringa Funeral Home, 122 S. Milwaukee Ave (Rte 83), Lake Villa, IL 60046. The funeral service will be at 10 a.m. on Friday, May 30, 2014 at St. Mark’s Lutheran Church, 1822 E. Grand Ave., Lindenhurst IL 60046 with the Rev. Terry Breum officiating. Burial will be at Northshore Garden of Memories in North Chicago. In lieu of flowers, memorials to the Salvation Army or St. Mark’s Lutheran Church would be appreciated.

George Arthur Lexau, age 90, of Lindenhurst, died Wednesday, May 28, 2014 after a long illness. He was born April 9, 1924 in Chicago. The family moved to Long Lake, IL while he was still in elementary school. He was attending St. Olaf College... View Obituary & Service Information

The family of George Lexau created this Life Tributes page to make it easy to share your memories.

Send flowers to the Lexau family.