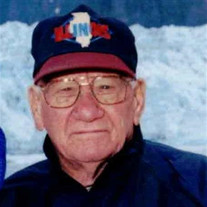 Harold Avon Severson, 96, of Lake Zurich, IL, formerly of Lake Villa and Fox Lake, IL, passed away peacefully on Wednesday, Feb. 20, 2019. He was born May 12, 1922, in Long Lake, IL, to the late Even (Louis) and Helen (née Ohman) Severson, graduated from Antioch High School, and then served in the Army Air Corps during WWII. After the war Harold returned to Lake County where he met and married his wife, Lorraine Luehr, on March 15, 1952, and she preceded him in death on Oct. 31, 2017. He worked his entire career as a carpenter where he was known for his work ethic and his master workmanship. For over 70 years, Harold was in the Carpenter’s Union. It’s hard to summarize all of his many hobbies, interest, and activities over the course of 96 years, but Harold will always be remembered for his incredibly sharp mind, the vast amount of knowledge he possessed from years of avid reading, loyalty to friends, and his love for and devotion for family, which was his greatest joy in life. Survivors include his three children: Sue (Jim) Thompson of Hawthorn Woods, IL, Bill (Debbie) Severson of Lake Villa, IL, and Dave (Debbie) Severson of Manassas, VA; seven grandchildren: Kirsten (Robert) Manire, Nick (Andrea) Severson, Garrett Severson, Kaitlin (Justin) Meyer, Karin Thompson, Rachel Severson, and Andrew Thompson; four great-grandchildren: Jake, Luke, and Cole Severson, and Mattias Manire; his cousin, Ronald Fross; and relatives in Norway. In addition to his wife of 65 years, Lorraine, and his parents, Harold was preceded in death by his two brothers, Bob and Gordon Severson. A memorial visitation will be held from 4-8 pm, Friday, April 5, at Ringa Funeral Home, 122 S. Milwaukee Ave., Lake Villa, IL. Interment in Avon Centre Cemetery will be private. In lieu of flowers, memorial donations to JourneyCare Hospice are appreciated. Donations may be sent to JourneyCare Foundation, 2050 Claire Court, Glenview, IL 60025, with “in memory of Harold Severson” written on the check memo line.

The family of Harold Avon Severson created this Life Tributes page to make it easy to share your memories.

Send flowers to the Severson family.