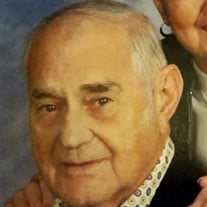 James ‘Jim the Barber’ Nikolai, 83, of Lindenhurst, IL passed away on Monday, October 31, 2016. Jim was a longtime Lindenhurst resident and worked as a barber in Lindenhurst and Lake Villa from 1959 until his retirement in 2007. He was also an active member of Prince of Peace Catholic Church where he volunteered as an usher and was a Knights of Columbus member. Jim was a proud veteran of the United States Army, serving in the Korean War from 1953-1955 as a Corporal. He received the Korean Service Ribbon, United Nations Service Medal, National Defense Service Medal, and an award for marksmanship. Following his service in the Army, Jim was a 60 year member of the Lake Villa American Legion and the VFW. In May 2016, he was honored by the Lake County Honor Flight to Washington, DC. Jim is survived by his children David (Robin), Jim (Amy), and Brian; grandchildren Danielle (Jim) Sisson, Samantha Vos, Abigail Nikolai, Rebecca Nikolai, Joseph Nikolai, and Jenelle Nikolai; great granddaughter Allison Sisson; siblings Clarence (Norma), Richard (Marie), Patrick (Helen), Lucille Adamus, and Jeanette Richards; and by many nieces, nephews, and lifelong friends. He was preceded in death by his wife Ariel, daughter Patricia Nikolai, and his sister Lenore Heinemann. Visitation will be from 4 – 8 p.m. on Friday, November 4, 2016 at Ringa Funeral Home, 122 S. Milwaukee Ave. Lake Villa, IL 60046. Prayers will begin at the funeral home at 9:30 a.m. Saturday followed by a procession to Prince of Peace Church for a 10 a.m. Mass. Burial will follow at Millburn Cemetery. In lieu of flowers, please consider a donation in Jim’s memory to the Lake Villa Township Food Pantry or to the Lake County Honor Flight, www.lakecountyhonorflight.org.

The family of James 'Jim the Barber' Nikolai created this Life Tributes page to make it easy to share your memories.

Send flowers to the Nikolai family.