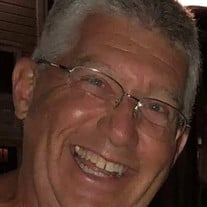 John Barry O'Connor, age 65, of Orange Park, FL, passed away on Sunday, April 3, 2022. Barry was born in Evanston, IL on April 29, 1956, the son of the late Raymond A. and Eleanor J. O’Connor. He grew up in the Rogers Park area of Chicago and graduated from St. Margaret Mary School in 1970. He graduated from Sullivan High School in 1974 and later moved to Lindenhurst to raise his family. Barry and Rhonda moved to Florida in 2005. Barry was the owner and CEO of Barry’s Drapery Service. He worked as a custom drapery and blind installer for JC Penney in the Chicagoland area and in Florida. While working in Florida, he was often sent to the Myrtle Beach and Charleston areas to perform installations. Barry credited his friend and former JCP coworker, Otto Perez, with “showing him the ropes.” He took great pride in his work and was very meticulous. Barry was quite the jokester and enjoyed laughing and making people laugh. Barry also enjoyed many outdoor activities including rock climbing (taught to him by his sister Mary), camping (especially at Devil’s Lake State Park in Wisconsin), and wildlife observation. He was especially fond of birds, deer, squirrels, and butterflies, even building a monarch butterfly hatchery to help save the monarch butterflies. He enjoyed cooking outside on the barbecue and took great pride in caring for his lawn. Barry also had many beloved dogs through the years including Pat, Snickers, Heidi, and Chloe. He enjoyed visiting Disney Parks in Lake Buena Vista and his brother Mike even taught him to talk like Donald Duck He is survived by his wife of 41 years Rhonda; children Denise (James) Vick, Christine (Joe) Perez, and Alexander O’Connor; sister Eleanor (late George) Fillipp; and by many nieces, nephews, great-nieces and great-nephews and cousins. Barry was also a loving "Gramps" to his grandchildren Jimmy Vick and Evelyn Vick. He was preceded in death by his siblings Helen (George) Morin, Mary F. O’Connor, and Michael (Chris) O’Connor. Visitation will be 10 am - 12 pm on Friday, April 29, 2022 at Ringa Funeral Home, 122 S Milwaukee Ave. Lake Villa, IL 60046. A funeral service will begin at noon on April 29, 2022. Burial will follow at All Saints Cemetery in Des Plaines, IL.

The family of John Barry O'Connor created this Life Tributes page to make it easy to share your memories.