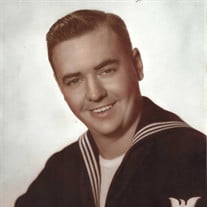 Not sure what to send?

Jon Charles Habermaas, 83, died on Tuesday, May 3, 2022. Jon was born July 3, 1938, the son of the late Charles William and Grace (nee Izatt) Habermaas at Little Company of Mary Hospital in Evergreen Park, IL. He attended Henry R Clissold elementary school and graduated from Morgan Park High School in 1957. Jon went to work as an apprentice pipe organ technician in the shop of DS Wentz, repairing and restoring pipe organ components. He enlisted in the United States Navy, serving as an electronics technician. He served on board several Navy ships including the USS George Clymer APA 27, the USS Tatnuck ATA 195 and the Guided Missile Destroyer USS John King DDG 3. Jon also served on board an amphibious troop transport and an auxiliary ocean tugboat. He completed two tours of duty at Great Lakes Naval Training Center as an instructor at Electronics Technician Class A School. In addition to his duties as an electronics technician, Jon served with the staff at Commander Amphibious Force Atlantic, Little Creek, and US Navy Communications Station on Diego Garcia, Indian Ocean. He was later transferred to US Navy Fleet Reserve as Chief Petty Officer in December 1980. In January, 1981, Jon started working as a technical maintenance engineer at ABC Chicago WLS TV station, repairing and installing new studio equipment and monitoring the quality of TV signals throughout the engineering plant. He also filled in as operator when needed. Toward the end of his career, Jon became a video tape operator and in the final years was the technical director assigned to the on-air control room overseeing automated operation of program switching. After retiring in 2001, Jon earned an Associate’s degree from the College of Lake County. He then attended Carthage College in Kenosha, WI, majoring in music and studying organ performance with William Roth, Michael Burkhardt, and Richard Hoskins. The onset of serious health issues prevented Jon’s completion of his degree at Carthage. For over 40 years, Jon was a volunteer member of the Illinois Railway Museum in Union, IL, working in the electric car shop and as an operator of the museum’s many demonstration trains. He is survived by his wife Betty Warren Habermaas; children James D Miltier, Jr, Ivie Miltier Dohrn, George Scott Habermaas, Lisa Habermaas Mickey; ten grandchildren; and by his brother William R Habermaas. Visitation will be 3 – 7 p.m. on Tuesday, May 17, 2022 at Ringa Funeral Home, 122 S Milwaukee Ave. Lake Villa, IL 60046. A funeral service will begin at 10 a.m. on Wednesday, May 18, 2022 at the funeral home. Burial will follow at Highland Memorial Park Cemetery in Libertyville, IL.

The family of Jon C Habermaas created this Life Tributes page to make it easy to share your memories.

Send flowers to the Habermaas family.