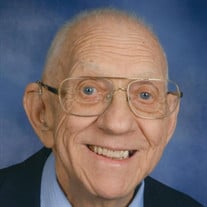 Joseph Elmer Smith, age 84, formerly of Round Lake Beach, IL passed away on Friday, July 8, 2016. Joe was born April 5, 1932, the son of the late Joseph and Effie Smith. On Oct. 18, 1958 he married Marie Rauch who preceded him in death on Sept 28, 2011. Joe lived in Round Lake Beach since 1964, recently relocating to Fox Lake, and was a member of Prince of Peace Catholic Church in Lake Villa. He enjoyed camping, woodworking, and attending Bible study. He is survived by his daughters Joanne (Jordan) Mott, Kathleen (Charles) Ely, and Michelle (James) Mauck; grandchildren Catherine, Sara, Clara, Caroline, Olivia, Addison, Alyssa, Joseph, and Jacob; and by his brothers Leroy, George (Alice), and Richard (Carolyn). He was preceded in death by his wife Marie and by his siblings Charles, Doris, Harold, Eleanor, William and John. Visitation will be 4 – 8 p.m. on Wednesday, July 13, 2016 at Ringa Funeral Home, 122 S. Milwaukee Ave. Lake Villa, IL 60046. Prayers will begin at 9:30 a.m. at the funeral home on Thursday, July 14, 2016, followed by a procession to Prince of Peace Church for a 10 a.m. Mass. Burial will follow at Ascension Cemetery in Libertyville, IL. In lieu of flowers, please consider a contribution in Joe’s memory to the charity of your choice.

The family of Joseph Elmer Smith created this Life Tributes page to make it easy to share your memories.

Send flowers to the Smith family.