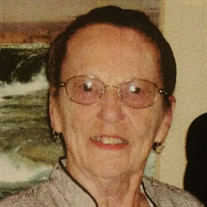 June A. Marshall, 87 of Lindenhurst, passed away on Wednesday, May 22, 2019. She was born on June 9, 1931, in Starview, PA, to the late Cletus and Amy Brown. June married Austin on February 28, 1953, and in 1963, they moved to Lindenhurst. She was a secretary at the Pentagon in Washington, D.C., as well as a teletypesetter for National Press for 18 years. June also worked at Kiley Center for 10 years. June was a wonderful wife and the best mother a person could ask for. She had a love for music which she showcased through her ability to sing and play the piano. June directed many of the choirs at her church. She is survived by her husband Austin; her children Bruce Marshall, Ronda (Robert) Kujawinski, Wanda (Marc) Berzin, and Brenda (Charles) Kempf; her grandchildren Candy, Tina, Lisa, Jerica, Nicole, Jeremiah, Tamara, Monica, Charles, and Courtney; her 18 great-grandchildren; and her sister Donnie Lou (Sylvester) Gladfelter. A visitation will be held on Saturday, May 25, 2019, from 10 to 11 a.m. at Ringa Funeral Home, 122 S. Milwaukee Ave., Lake Villa, IL 60046 with a service to begin at 11 a.m. Burial will follow with procession to Highland Memorial Park, Libertyville, IL.

The family of June A. Marshall created this Life Tributes page to make it easy to share your memories.

June A. Marshall, 87 of Lindenhurst, passed away on Wednesday,...

Send flowers to the Marshall family.