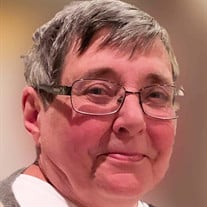 Karen Kube aged 77 died November 25, 2020, in her home in Pleasant Hill, IA. A drive through visitation will be held from 5 to 7 p.m. Thursday, December 3 at Iles Grandview Park Funeral Home, Des Moines. Graveside services will be held 11 a.m. Saturday, December 5 at Millburn Cemetery, Wadsworth, IL. Karen was born in Chicago, IL November 8, 1943 to Russell and Helen (Lindberg) Davis. She was the oldest of four girls growing up in a 3-bedroom house in Chicago. She graduated from high school and nursing school in Chicago, becoming an RN. In 1965 she married Loren Mason in Chicago, and after he left the Navy, they moved from Virginia to Lake View, IA. They had three children Julie, Tom and Kathy. In April 1991 she was married to Kirk Kube of Lindenhurst, Il, where she gained another son. Timothy. Karen worked in the nursing field until she retired. She specialized in geriatric nursing and worked at multiple nursing homes in Illinois and Iowa, and she also worked for several years as a school nurse in Carroll, IA while her children were in elementary and high school. She loved her kids and adored her grandchildren and was proud of them all. She was called upon a lot for advice when any of the kids/grandkids were sick or hurt and made a point to spend as much time with them as she could. She enjoyed her flower gardens and plants and liked nothing better than to get dirt on her hands; there weren’t too many flowers and plants she didn’t know. Karen is survived by her children, Julie Pellegrino (Dave) of Pleasant Hill, Tom Mason- (Jennifer) of Grayslake, IL, and stepson, Timothy Kube (Deanna) of Lake Villa, IL; her grandchildren, Jacob Pellegrino, Lucas Pellegrino, Tyler Kube (Lizzie) and Savannah Mason; her sister, Judy Perillo (Phil) of Wheaton, IL: four nieces, Kim, Dawn, Bethany and Amelia; and numerous cousins. She was preceded in death by her parents, Russell and Helen; her sisters, Arlene and Norma; her husband, Kirk; and her daughter, Kathy. In lieu of flowers, the family suggests donations to the Susan G. Komen Breast Cancer Foundation or the Animal Rescue League, Des Moines. Arrangements by Iles Funeral Homes and Ringa Funeral Home.

The family of Karen Kube created this Life Tributes page to make it easy to share your memories.

Send flowers to the Kube family.