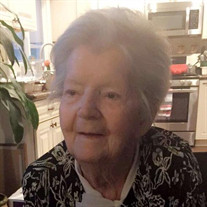 Kathleen Virginia Smith nee Ludden, 92, died October 16, 2018, in Lake Villa, IL. A proud Irish Catholic, she was the sixth of seven children born to Patrick Ludden and Ellen Henry on July 22, 1926, in Chicago, IL. She married Robert Smith on January 12, 1952, and they were happily married for 57 years. A loving mother to Marilyn Antkowiak, Robert Eugene Smith, Diane (Scott) Daruty, Timothy (Guadalupe) Smith; proud grandmother to Ryan, Michael, Susana, Luis, Matthew, Tania, Emily, Kayla, Natalie, and Christian; and cherished great-grandchildren to Ezra, Ames, and Theodore. A special thanks to Maria and Sergio for their dedication and love. Kathleen was always known by her family as a loving and gentle person who was incredibly dedicated to her loved ones. She was a resident of Chicago for 81 years and Kathleen moved to Milwaukee, WI with her husband in 2007 where they lived until his death in 2009. Following that she moved to Lake Villa, IL to live with her youngest son Tim and his family where she was cared for primarily by her Daughter-in-Law Guadalupe. She will be missed greatly by her loving family and friends. Visitation will be held from 9 to 10 a.m. on Monday, October 22, 2018, at Prince of Peace Catholic Church, 135 S. Milwaukee Ave, Lake Villa, IL 60046 with mass to follow at 10 a.m. Burial will be at All Saints Cemetery in Des Plaines, IL.

The family of Kathleen Virgina Smith created this Life Tributes page to make it easy to share your memories.

Send flowers to the Smith family.