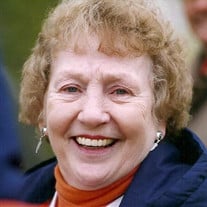 Early March 4, 2019 Katie O'Connor, a long time Grand Ledge Michigan resident, peacefully passed away at her home in Illinois. Katie was born on August 21, 1925 in a small mining community in southern Illinois into a family with strong Scottish roots. Her mother was born in the United States to a family recently arriving from Scotland, while her father immigrated from Scotland at 16 years of age. She was one of six children in the McMillan family and she always told stories about growing up in a house filled with extended family. Katie was a good student and graduated from high school early. She attended Blackburn College in Carlinville Illinois for a year before moving on to the University of Illinois at Urbana-Champaign where she graduated with a BA in Liberal Arts & Sciences, in 1949. Katie met Jack O'Connor while a student at U of I and they were loyal Illini to the end. They spent many years traveling the country cheering for their beloved team. Living in Michigan was not always easy for Illinois sports fans and more than once they woke to their trees covered with toilet paper on a Michigan State game day. Katie might have grumbled, but she truly enjoyed the attention. Katie and Jack raised their family in Grand Ledge and were very active in the community. Katie taught school for 36 years and was beloved and respected by many students and peers. Throughout her career she got to know many of the young people in the community and as time went by, she could never make a quick trip to the grocery store. She frequently ran into former students or parents and Katie always made time to find out how they and their friends were doing. Keep your pleasant memories of Katie alive and always be kind to those around you. GO ILLINI! She is preceded in death by: Her father, John D. McMillan, her mother Margret M. Cowie, her daughter, Margaret O’Connor, her son William M. O’Connor, her husband Jack T. O’Connor, her grandson William T. O’Connor, her sister Margaret C. McMillan, her brother William C. McMillan and wife Dora, her sister Mary M. Long and husband Donald, and her sister Marion M. Forbes and husband John. She is survived by: Her brother John S. McMillan, son Pat O’Connor (Jackie), grandson Ryan O’Connor (Jody) and great granddaughters Kat and Eda O’Connor, daughter in law Kris O’Connor (wife of William M. O’Connor) granddaughter Riley O’Connor, grandsons Rory O’Connor and Sean O’Connor, son Jay O’Connor (Allie) and many nieces, nephews and friends. Memorial contributions may be made to University of Illinois I FUND Kathryn O’Connor Memorial, 1700 S. 4th St. Champaign, IL 61820.

Early March 4, 2019 Katie O'Connor, a long time Grand Ledge Michigan resident, peacefully passed away at her home in Illinois. Katie was born on August 21, 1925 in a small mining community in southern Illinois into a family with strong Scottish... View Obituary & Service Information

The family of Katie O'Connor created this Life Tributes page to make it easy to share your memories.