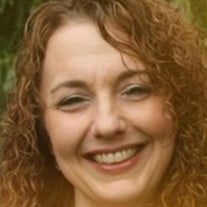 Kim Miller was born June 1st, 1968. Daughter to Fred and Norma Stroud and sister to Greg, Michael, Jayla, and Sherry. Kim is survived by her husband, Guy, their son, Mike, and is preceded in death by their late son, Ryan. On January 1st, 2020, Kim committed suicide in her family home in Lake Villa. Kim was born in Chicago and later in Elk Grove Village met the love of her life, Guy. High school sweethearts, they got married shortly after graduating and have been married a wonderful 32 years. After nursing her husband through Hodgkin's Disease, Kim and Guy decided to become foster parents. Together in 1995 they adopted and began raising two young boys, Mike and Ryan. From that day forward, caring for them, her family, and anyone else in need became her life's goal. Anyone who knows Kim, knows her as a caretaker. Her giving nature and desire to help those in need is what drove her. Kim loved children. Her own children were the light of her life. Shortly before her passing, she began volunteering at a home for foster children as well as a kitchen aid in a local middle school. In conversation, she often mentioned how she wished she could take home the kids she met. In 2018, her youngest son, Ryan, after a lengthy battle with mental illness, took his own life. Distraught and broken-hearted, Kim still sought out friends and family, continuing to volunteer and help those in need. Kim lived to be needed. Her family still needs her and is devastated to see her go, but wishes her to be remembered by her bravery in the face of difficulty and her comittment to family and loved ones. Kim's selflessness and love of family is the legacy she leaves behind. She will be deeply missed by family and friends. Visitation and viewing will take place on Monday January 6, 2020 from 4:00 - 8:00 pm with a service starting at 7:30 pm at Ringa Funeral Home 122 S Milwaukee Ave. Lake Villa, IL. Cremation will be private.

Kim Miller was born June 1st, 1968. Daughter to Fred and Norma Stroud and sister to Greg, Michael, Jayla, and Sherry. Kim is survived by her husband, Guy, their son, Mike, and is preceded in death by their late son, Ryan. On January 1st, 2020,... View Obituary & Service Information

The family of Kim Miller created this Life Tributes page to make it easy to share your memories.

Send flowers to the Miller family.