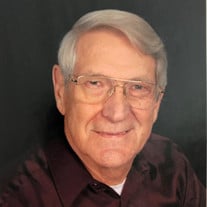 Louis Korom Jr., 87, passed away peacefully in his sleep on April 23, 2020 at The Village of Victory Lakes. He was a long-time resident of Lake Villa. He was born in Barberton, Ohio, on January 22, 1933 to Louis and Elva Korom (nee Carlson). He was a brother to his sisters Barbara, Michael, Beverly and his adoptive brother Melvin. He married Bonnie Bray in 1952 and over the years they had four boys: Louis III, Gordon, Greg and Kevin. After graduating with his Bachelors’ Degree in Corporate Finance and Business Administration from the University of Akron in 1955, he began working for the Goodyear Tire and Rubber Company. He also served in the US Army as a Deputy Finance Officer for Fort Campbell, Kentucky, and later, after being called to active duty by President Kennedy, he became company commander at Fort Chaffee, Arkansas in 1960. After serving the military, he returned to Goodyear in Akron, Ohio, for 20 years as a Finance Manager, then left for a position as Manager of Cash, Banking and Investments worldwide for Abbott Laboratories, North Chicago, Illinois in 1974. He was promoted to Assistant Treasurer in 1981 and retired in 1993. During his tenure at Abbott he was the founding director and past chairman of the Abbott Laboratories Employee Credit Union. Certified and active in Treasury Management circles in Chicago, he was the past president of the Chicago Finance Managers Association. Mr. Korom was also a distinguished alumnus of the University of Akron. He was active in Church activities as a Sunday School Superintendent for 25 years and president of each church in which he was a member. He was a world mission member and past chairman of the finance committee at the Lutheran School of Theology, Chicago. He was also director of the Clara Abbott Foundation. Upon retirement his main interest settled in prison evangelism and school ministry as the Illinois State Director and Board of Directors member of the Bill Glass Champions for Life Organization. Hundreds of thousands of students, jail detainees, prison youth and inmates heard the life saving Gospel through his stewardship in Illinois and nationwide. All Glory be to God for His faithful leading of a farm boy from Ohio to a lifelong journey for the work He had prepared for him. He is survived by his wife of 67 years, Bonnie; his sisters Michaelle and Beverly; his sons Louis III (Robin), Gordon (Glenna) and Kevin; his grandchildren David, Jason, Louis IV (Katie), Jessica (Eric), Michelle (Eric), Benjamin, Kara (Erick) and Ryan; and his great-grandchildren Nola, Arlo, Louis V, Logan, Matilda, and Theodore. He was preceded in death by his parents Louis and Elva; his son Greg; his adoptive brother Melvin; and his sister Barbara. All funeral services were held privately.

Louis Korom Jr., 87, passed away peacefully in his sleep on April 23, 2020 at The Village of Victory Lakes. He was a long-time resident of Lake Villa. He was born in Barberton, Ohio, on January 22, 1933 to Louis and Elva Korom (nee Carlson).... View Obituary & Service Information

The family of Louis Korom Jr created this Life Tributes page to make it easy to share your memories.

Louis Korom Jr., 87, passed away peacefully in his sleep on April...

Send flowers to the Korom family.