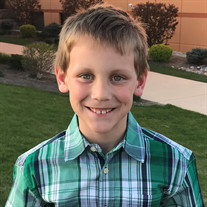 Maddox Joseph “Maddog” LoPriore (8 1/2 years old) passed on to Heaven on October 17, 2018. He slipped into a diabetic coma due to Diabetic Ketoacidosis and a blood clot on his brain. He will now be another of God’s angels. “Madman” was a true force of nature and well-loved by ANYONE who met him. He was smart, funny, loving, kind, and thoughtful. He always smiled and asked “why?” incessantly! This athletic little boy played sports, especially soccer and basketball, with such intensity that he easily competed with older children. He also had the positive energy to be considered the mascot of all the teams he was on (and not on, lol!). Maddox had every plan on playing baseball this spring. His athletic prowess did not stop on the field either; he was a little ESPN junkie who was able to rattle off every single score and statistic after watching a game even when you thought he wasn’t watching the game! Maddox was a true force of nature and he was always smiling, a ray of sunshine, and when he walked into a room, it literally lit up. There was never a time where he did not want to help people; he always made himself known at any event and basically said, “I’m here, too!” One could possibly say that he was everyone’s little brother. He was stubborn, in a good way, but had the knack of making everyone he came into contact with feel very special. Those beautiful green eyes, mischievous smile, and optimistic nature made him an exceptional little boy. If one received a hug from this little boy (and you probably did at one point or another) you know how special he was. Some of Maddox‘ family members all shared something about a great memory of theirs. Grandpa Frieders remembers taking him to his first Packer game and he was so excited. He said he noticed everything and could spew back any play or score. Grandma remembers him saying, “Gwamma” and running to give her a hug. His dad always had these Peanuts cartoon blankets and every single time he “lost” one, it was usually found in Madman’s room! (The count was like 7!) His mom loved that Maddox never failed to ask about her day and truly listened to her response. A very rare thing for a little boy to do. AJ will miss not seeing him or not being able to take him to summer camp or picking him up from extended care. Zach loved playing Call of Duty Zombies, NBA 2K, or FIFA with him but noted that Maddox “tended to go down first! “ Cooper shared a bedroom with him and he will miss most that Maddox always tried to be like him and was annoying! (Can you say, Mini Me?!) He so loved Captain America, Paw Patrol, Cars, and the cartoon, Henry Danger. He would wear his Captain America outfit even if it were in June! His plan this year for Halloween was to go as Aaron Judge, from the Yankees. One person said that Maddox lived his life fully: “He lived every single day of every single year of his eight and a half years.” Another lady wrote on the Go-Fund-Me page, “He spread more love and joy in his 8 1/2 years than some people do in a very long lifetime!” His final gift was to be an organ donor to the Gift of Hope organization. So some very lucky 0 to 10-year-old boy received his heart early Friday morning! And some five-year-old girl, another organ. And also, several thousand children will be affected by Madman’s donation of his two lungs. They are going to use his lungs to help develop a steroid-free medication. The tissues portion of the organ donations were done Friday morning and that would mean that he could help several other children with their eyes or with bone transplants. This child is truly an Angel of Mercy. His family has been through a harrowing experience in two different hospitals over the past week and it still resulted in his death. All of the personnel at Lurie’s Children Hospital were wonderful, especially the PICU nurses and even though they didn’t have the luxury to see this Maddox in action, they treated him with extreme respect and love. The funeral will not be the end of this awful ordeal; it’ll just be the start of a very heartbreaking experience in paying hospital and funeral expenses for a family of 6 (3 of whom are diagnosed as Type 1 Diabetics) and all of them attempting to reconcile this extremely sad loss of such a beautiful soul. People, whether we know them or not, have been amazing and the overwhelming response is a testament to this little boy’s loving manner and how people typically responded to him! Maddox is survived by his mother and father Kathleen and Ralph; his older brothers AJ, Zachary, and Cooper; maternal grandmother and grandfather Betty and John Frieders; paternal grandfather Ralph LoPriore; paternal grandmother pre-deceased him Frances LoPriore; uncles and aunts John (Kim), Jeanette (Dennis), Benedetta (Frank), Rosemarie (Frank), and Michael (Jeanne); cousins Madison, Thomas, Jack, Will, Nicholas, Nicole, Michelle, Brianna, Frankie, Madeline, and Michael; and Godparents, Victoria and Dave Moisa. Visitation will be at Ringa Funeral Home, 122 S. Milwaukee Ave., Lake Villa, IL 60046 from 9 AM to 1 PM and the church services will be 2 PM at Prince of Peace, 135 S. Milwaukee Ave., Lake Villa, IL 60046 this Saturday, October 20th, 2018. If you come to the visitation, you will enjoy some of his favorite foods, like strawberry frosted donuts! In lieu of flowers, if you could donate to the JDRF organization (https://goo.gl/yh2q7a), Ronald McDonald House (https://goo.gl/voCFbd), Prince of Peace Church, or the Go-Fund-Me fundraiser: 'Maddox LoPriore Being Laid to Rest' (gf.me/u/myp43c), that would be most appreciated by the family. God Bless and hold Maddox Joseph LoPriore in your loving arms and give him eternal life.

The family of Maddox Joseph LoPriore created this Life Tributes page to make it easy to share your memories.

Send flowers to the LoPriore family.