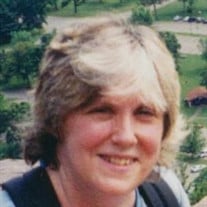 Mary Frances O’Connor, 72, of Lindenhurst, IL passed away on Tuesday, January 17, 2017. She was born in Evanston on November 27, 1944, the daughter of the late Raymond and Eleanor O’Connor. Mary was an avid traveler and particularly enjoyed the outdoors. She enjoyed camping and rock climbing and at one time was the Secretary of the Chicago Mountaineering Club. Mary also enjoyed watching Westerns; she especially liked Gunsmoke and the actor Lash LaRue. She always brightened the room when she walked in and will be remembered for her strength and endurance as well as her loving, caring, generous, and selfless approach to others. She is survived by her siblings Eleanor (late George) Fillipp and Barry (Rhonda) O’Connor; brother-in-law George Morin; sister-in-law Christine O’Connor; nieces and nephews Pandora (William) Rouleau, Anthony (Josette) Fillipp, Denise (James) Vick, Christine O’Connor, and Alexander O’Connor; nephew-in-law Eric (Heidi) Lynch; and great nieces and great nephews Katherine, Alexandra, Delaney, Patrick, Charlotte, Samuel, Nicholas, Ethan, Oliver, Beaumont, Jimmy, and Evelyn. She was preceded in death by her sister Helen Morin, brother Michael O’Connor, and niece Mary Frances Lynch. Visitation will be 4 – 8 p.m. on Friday, January 20, 2017 at Ringa Funeral Home, 122 S. Milwaukee Ave. Lake Villa, IL 60046. Additional visitation will begin at 9 a.m. on Saturday, January 21, 2017 at the funeral home followed by a procession to Prince of Peace Catholic Church for a 10 a.m. funeral Mass. Burial will follow at All Saints Cemetery in Des Plaines, IL.

Mary Frances O&#8217;Connor, 72, of Lindenhurst, IL passed away on Tuesday, January 17, 2017. She was born in Evanston on November 27, 1944, the daughter of the late Raymond and Eleanor O&#8217;Connor. Mary was an avid traveler and particularly... View Obituary & Service Information

The family of Mary Frances O'Connor created this Life Tributes page to make it easy to share your memories.

Mary Frances O’Connor, 72, of Lindenhurst, IL passed away on...