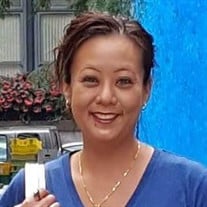 Nita Thongchai was born on August 21st, 1973. The world became a bit quieter and less fun on the morning of Tuesday, April 11, 2017. There were many hardships during her lifetime, but Nita always overcame those obstacles. Either this was because... View Obituary & Service Information

The family of Nita Thongchai created this Life Tributes page to make it easy to share your memories.

Send flowers to the Thongchai family.