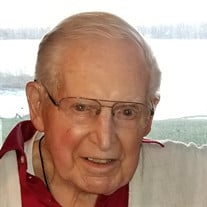 Norbert Edward Pischke, 93, of Venetian Village and Lake Villa, IL passed away on Saturday, February 8, 2020. He was born in Chicago on March 8, 1926, the third of twelve children of the late Martin and Rose Pischke. Norb graduated from Kelvyn Park High School in 1944 where he was active in basketball and golf and was elected Vice President of his graduating class. In 1946 he entered the Army and was awarded a WWII Victory Medal as well as an Army of Occupation Medal after serving in South Korea. He later started working for Illinois Tool Works in Chicago (where he met his beloved wife Betty). Holding various positions from Designer of Metal Cutting Tools to Manager of Quality Control, Norb was very proud of his contributions to ITW and would always remind people that “You are never more than a few feet away from a product of ITW.” After 38 years of service, he retired from ITW at age 57. Deciding that he was not quite ready to fully retire, he started working at Lake County Management Services in 1983. There he held various positions but when he retired in 1992 he was Manager of Map Services. Norb served 10 years (one as president) on the Grayslake Community High School Board of Education. He also served on the Venetian Village Civic Association (as president for two years). His Christian faith was very important to him. He was a charter member of St. Mark Lutheran Church in Lindenhurst, IL since 1961. Over the course of many years, he helped the church grow by holding various positions such as Sunday School Teacher, Sunday School Superintendent, Treasurer, Council Member, and President of the Congregation. Norb loved all sports but really enjoyed playing ping pong with his church buddies up until his mid 80’s. One of the recent accomplishments that he was so proud of was completing his book “A Historical Overview and Echoes from Three Lakes and a Village.” He is survived by his loving wife of 68 years, Betty Helen Pischke (nee Nurnberg); children Holly (Nick) Azzone, Mark (Melonie) Pischke, and Jon (Julie) Pischke; grandchildren Kim Stepp, Michael (Heather) Sooley, Shannon (Jeffery) LaPuma, Sara (Mike) Lewis, Amanda (Billy) Anderson, Kristin (Mike) Rosendahl, Nick (Tiffany) Azzone, and Owen Pischke; great-grandchildren Mason, Hadly, Aaron, Jacob, Chase, Ava, Megara, Clio, Anthony, Camden, Giuseppe, and Giuliana; and by his siblings Robert (late Corrine) Pischke and Audrey (Dan) Kwiatkowski. He was preceded in death by his sons Neal (late Judith) Pischke and Rex (Linda, surviving) Pischke, and by his siblings Martin (late Rose), Lawrence (late Laverne), Marlis (George, surviving) Pleickhardt, Roland, Rosemarie (late Frank) Bigden, Dorothy (late Earl) Kelly, Donald, Arthur, and Raymond (Sorrell, surviving). Visitation and viewing will be 9 - 11:30 a.m. on Saturday, February 15, 2020 at St Mark Lutheran Church, 1822 E. Grand Ave, Lindenhurst, IL 60046. A funeral service will begin at 11:30 a.m. on Saturday at the church. Cremation will take place privately.

Norbert Edward Pischke, 93, of Venetian Village and Lake Villa, IL passed away on Saturday, February 8, 2020. He was born in Chicago on March 8, 1926, the third of twelve children of the late Martin and Rose Pischke. Norb graduated from Kelvyn... View Obituary & Service Information

The family of Norb Pischke created this Life Tributes page to make it easy to share your memories.

Send flowers to the Pischke family.