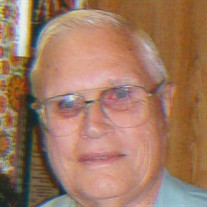 Vernon Patrick ‘Pat’ Henry, of Lindenhurst, IL went to join his wife Bette in heaven on Tuesday, March 21, 2017. Pat was born on January 15, 1925 in Rochelle, IL. He was the son of the late Joseph and Gertrude (nee Nealis) Henry. He served in World War II rising to the rank of First Lieutenant in the United States Air Force. He was a flight engineer for B-29s. Returning from service, he married the love of his life, Bette Jenkins, also of Rochelle, on April 3, 1948. Together, Bette and Pat had five children: Linda Manwaring of St. Joseph, IL, David Henry of Homer Glen, IL, Michael (Linda) Henry of Okawville, IL, Steven (Debbie) Henry of Urbana, IL, and Sarah (Ed) McClanahan of Peoria, IL. Together, Pat and Bette spent many years enjoying their grandchildren and great grandchildren. Pat graduated from Iowa State University and worked for Kraft Foods as a nutritionist before retirement. He managed Kraft’s research facility in Danville, IL and later worked in Kraft’s home office in Glenview, IL. After retirement, Pat worked for the U.S. Census in Lake County. He very much enjoyed meeting people and learning about the history of Lake County. Together, Pat and Bette enjoyed attending estate sales and finding treasures (not only things, but also new friends). Pat was preceded in death by his parents and brothers Paul, Francis, and David. After Bette passed, in December 2014, Prince of Peace Catholic Church became Pat’s ‘family.’ He was lifted up and continued his life journey with so many special friends from Prince of Peace. Their friendship and prayers were invaluable to him these last two years. Visitation will be from 9:30 – 10:30 a.m. on Friday, March 24, 2017 at Prince of Peace Church, 135, S. Milwaukee Ave, Lake Villa, IL 60046 followed by a 10:30 a.m. funeral Mass. Burial will be at St. Patrick Cemetery in Rochelle, IL on Saturday, March 25, 2017 at 11 a.m. Memorials may be made to Prince of Peace Church. Arrangements under the care of Ringa Funeral Home.

The family of Pat Henry created this Life Tributes page to make it easy to share your memories.

Send flowers to the Henry family.