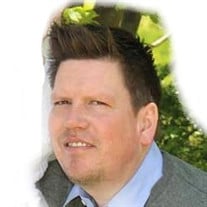 In the early evening hours of December 14, 2017, Patrick Adam Ewert, age 39, was welcomed into his heavenly home. Family and friends were shocked and saddened at his sudden passing and will miss his selfless love and giving nature. Those who knew and loved him, called him “Pat.” For those of us currently experiencing this heart wrenching and gut punching loss, comes the realization that Patrick’s heaven sent and earthbound responsibilities are complete. His generosity of spirit, quick wit, and humorous outlook touched many lives. The words, “BIG HEARTED” define Pat. We are truly blessed to have had a part to play in Pat’s earthly journey. His experiences with us commence a course charted by his Maker that transcends into Pat’s continuing and preplanned Heavenly role. Pat’s most important, selfless, and by far extraordinary contribution as a Christian emerged as a middle schooler when he convinced his parents to welcome children from broken families into their home. Pat became a brother, a mentor, a coach and confidant to many of these struggling and confused children. However; and unbeknownst to all at that time, was the positive, exponential, butterfly effect that ensued. One of these children in particular, Dave, who is now Pat’s brother, grew into a wonderful, caring, giving, and productive individual and parent. This chance opportunity emerged directly from Pat’s persistence, unconditional love, and purity of soul. In his younger years, Pat was a versatile athlete. He loved sports and was especially fond of baseball and football. He shared and developed his skills with the Lake Villa Little League, Antioch Vikings Football and Antioch High School Athletic Department. After high school, Pat’s outlet for his tough and physically aggressive side involved participation in the Men’s Iceless Hockey League and swearing loudly at the television when the Chicago Bears or Chicago Cubs executed dumb-ass plays. He is fondly remembered by his nieces and nephews because their cool Uncle Pat knew how to play an awesome game of Hide-N-Seek. When found in their semi-obvious, somewhat exposed hiding places, he created a belly-squealing encounter that had them begging for more. Pat taught them how to throw a baseball, arm-pit fart, fight with water balloons, and play video games. The most valuable life-lessons Pat passed to the next generation involved the art of the practical joke. With limited text space, one cannot do justice describing those creative pranks. Pat went above and beyond and did not discriminate when helping God’s creatures. Of the four-legged variety, Pat’s love of animals emerged in childhood. Upon arriving home from work one evening and finding Pat sitting on the stoop, his father commented, “Why is there a shoebox with a Chipmunk on my front porch?” To which Pat responded, “I found him lying in the road and I didn’t want him to die alone.” He regularly transported elderly neighbors, helping them to complete shopping errands or attend medical appointments. He assisted disabled friends and neighbors with household tasks and yardwork. Over the last several years, and much to their delight, he played Santa for the local neighborhood children and their parents. The evening before his passing, Pat stayed awake all night nursing his nephew who was recovering from oral surgery. Patrick was born in Libertyville, Illinois and grew up in Lindenhurst and Lake Villa, Illinois. He was a graduate of Antioch Community High School and held a degree in Culinary Arts from Le Cordon Bleu. He spent time in California and Oregon, where he practiced as a chef. His innate sense of humor was further developed when he studied comedy with Second City in Chicago. Pat excelled at ‘impromptu,’ and to those familiar his wordy banter and repartee, you are now laughing at those fond memories. Pat was also a self-taught cartoon / caricature artist and massage therapist. Although encouraged to submit his drawings for publication, he never felt confident enough to do so. Those who were lucky enough may have received one of Pat’s famous reflexology foot massages. Patrick is preceded in death by his grandparents, Clarence and Minnie Ewert, Donald and Elaine Rayburn and his aunt, Patricia Leonard. He is survived by two schnauzers, Fritz and Heidi; one sun conure, Tarzan; and his parents, Clifford and Barbara Ewert of Lake Villa. He is also survived by two brothers and sisters: Christine (Jeff) Fugelseth of Tavares, Fl; Andrew (Linda) Ewert of Waterford, WI; Carole (David) Smith of Arnold, MD; and David (Kelley) Whitescarver of Wauconda, IL. He is further survived by his Aunt Norma Ewert and Honorary Aunt Mary ‘Amy Wagner’ of Milwaukee, WI; nephews Travis Fugelseth, Hunter Smith, and nieces; Kathryn Fugelseth, Lauren Smith, Natalya and Natasha Ewert, Grace and Gwen Whitescarver, and great niece; Emily Fugelseth-Rose. He is also survived by a young man who lives with the Ewert’s Justin Mooney. He is survived by other relatives and friends. We must now dry our tears and smile, as the plans our Lord has for Patrick outweigh our earthly needs. Please come and celebrate Pat’s BIG HEARTED life with us. Visitation will be held at Ringa Funeral Home in Lake Villa, Illinois on Tuesday, December 19th from 4:00PM to 8:00PM. On Wednesday, December 20th at St. Mark Lutheran Church in Lindenhurst, Illinois, a one hour visitation from 09:00 to 10:00AM will commence prior to the 10:00AM Funeral Service. Burial will follow in Oak Hill Cemetery, Horicon, Wisconsin. In lieu of flowers, donations may be made to The Lake Villa Little League.

In the early evening hours of December 14, 2017, Patrick Adam Ewert, age 39, was welcomed into his heavenly home. Family and friends were shocked and saddened at his sudden passing and will miss his selfless love and giving nature. Those who... View Obituary & Service Information

The family of Patrick Adam Ewert created this Life Tributes page to make it easy to share your memories.

Send flowers to the Ewert family.