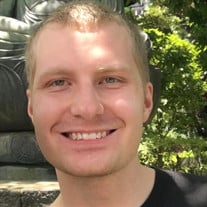 Payton “Ryan” Miller was born on October 1st, 1995. He had one older brother, Fred (who the family affectionately refers to as Mike) and lived with his mother and father, Kim and Guy Miller in Lake Villa. On October 7th, 2018, Ryan committed suicide after a 12 year battle with mental illness. Ryan and Mike were adopted by Kim and Guy on February 16th, 2000. Ryan was an affectionate, loving son who prized others' well-being before his own. He was diagnosed with Tourette’s and OCD at age 11 and was in and out of hospitals and wards from then until very recent. He often obsessed about the years of his childhood lost to those illnesses. That being said, critters trapped in window wells of his parent’s home and spiders caught roosting in the corners of the house were often rescued by Ryan’s keen eye and generosity. He loved helping. He loved being relied upon. He lacked love for himself, but made sure his family and friends knew he cared for them. He was the guy that would ring the bell when he left a restaurant, letting the employees know the service was good. He was the kind of guy that got stuck holding the door open for people several yards away. Despite what demons he faced inside and the growing torment that he could just never fit in, Ryan was charismatic. When he was homeless, wandering around the southern United States, it was his ability to connect with others that eventually guided him home. He was competitive. He hated to lose. He always said, “I’m going to do it perfectly or I’m not going to do it at all”. He loved Japan and Japanese culture. He and his brother recently completed a trip to Japan, where he was truly happy. He brought many things back, from fortune cookies to rare figurines. He was surrounded by his passions, his fascinations, and away from the societal obligations that tormented him and his sense of belonging. He often stated sadly that he could just not see himself leading a “normal life” Ryan’s obsession with achieving perfection was both his greatest asset and worst vice. His family wishes for him to be remembered by his unrelenting affection for family, friends, animals, and total strangers. Ryan will be deeply missed. Visitation will be held on Friday, October 12, 2018 at Ringa Funeral Home, 122 S. Milwaukee Ave., Lake Villa, IL 60046 from 4 to 8 pm. A funeral service will begin at 7:30 pm. Cremation will be private.

Payton &#8220;Ryan&#8221; Miller was born on October 1st, 1995. He had one older brother, Fred (who the family affectionately refers to as Mike) and lived with his mother and father, Kim and Guy Miller in Lake Villa. On October 7th, 2018, Ryan... View Obituary & Service Information

The family of Payton "Ryan" Miller created this Life Tributes page to make it easy to share your memories.

Send flowers to the Miller family.