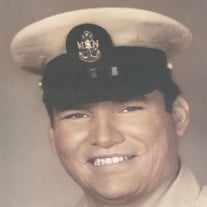 Raul ‘Argo’ Argomanez, 77 of Grayslake, passed away on Wednesday, May 29, 2019. He was born on November 16, 1941 in Yuma, AZ, to Raul and Rebecca Argomanez. Argo served in the United States Navy for 22 years until he retired as Senior Chief Petty Officer (Rank E8). He also was a member of the National Guard for 2 years. During his naval career, Argo sailed all over the world and earned numerous awards including the National Defense Service Medal, Vietnam Service Medal, and the Armed Forces Expeditionary Medal. Argo continued working for the U.S. Navy as a private citizen after retiring. He was proud of his Native American and Hispanic heritage and enjoyed antique car shows and science fiction. For nearly 40 years, Argo was a resident of Grayslake and will be remembered as a great husband, father, and grandfather. He is survived by his wife of 52 years Shirley Argomanez; his daughters Michelle (Rodolfo) Ceniceros and Rebecca (Tom) Weber; his grandchildren Rudi, Brendon, Kayla, TJ, and Josh; his siblings Elena, Frances, Mary, and David; and numerous nieces and nephews. He was preceded in death by his parents Raul and Rebecca Argomanez and his sisters Carmen, Racheal, and Sylvia. Visitation and viewing will be held on Wednesday, June 5, 2019 from 2 to 6 p.m. at Ringa Funeral Home, 122 S Milwaukee Ave, Lake Villa, IL 60046 with the service to begin at 5:30 p.m. Burial of the cremated remains will be held on Friday, June 7, 2019 at 1 p.m. at Ascension Cemetery in Libertyville, IL.

The family of Raul 'Argo' Argomanez created this Life Tributes page to make it easy to share your memories.

Raul ‘Argo’ Argomanez, 77 of Grayslake, passed away on Wednesday,...

Send flowers to the Argomanez family.