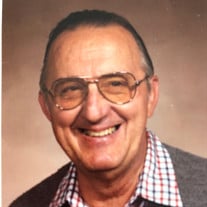 Renzo “Rene” Azzano passed away quietly at his home in Lindenhurst, IL on August 3, 2019 at the age of 97. He is survived by Judith, his wife of 58 years, his children Larry (Kei), Chris (Jennifer), and Claudia (Rajesh), and grandchildren Allison, Steven, Serena, Sophia, and Olivia. He is also survived by his sister Nerina and numerous nieces, nephews, and cousins. Renzo is preceded in death by his parents Palmira and Cesare Azzano and his younger sister Edna Wautelet. Renzo was born in Blue Diamond, Kentucky, in 1922 to Palmira and Cesare Azzano, who had recently immigrated to the US from Friuli, Italy. The family soon moved to Ohio and from there to Detroit as they pursued the American Dream. As a youth living in Detroit, Renzo discovered a love of aviation which led to his service in the US Army Air Corps during World War II as an aircraft mechanic and B-25 Crew Chief. He was also qualified as a B-25 Flight Engineer. After the war, he returned to work in construction beside his father and attended Wayne State University in Detroit on the GI Bill. He graduated from Wayne State and became a school teacher. Outside of school, he developed what would become lifelong interests in skiing and tennis, sports he enjoyed well in to his 80s. He travelled internationally numerous times and became a formidable Bridge player. He also loved classical and jazz music. In the early 1960s, he attended a life-changing Christmas party in Detroit where he met Judith. They were married at Our Lady of the Lake in Prudenville, Michigan, in May 1961. The family lived in Detroit until a job offer in Traverse City drew them north in 1968. For over 40 years, Renzo and Judith lived in Elk Rapids and later in Acme. Renzo, more commonly known as “Mr. Azzano” to his students, taught American Government, History, and Civics at Traverse City Senior High School for the next 17 years until he retired. During his time in Northern Michigan, Renzo served his community as a volunteer emergency responder and a professor at the local community college. He was also an avid gardener. In 2015, Renzo and Judith moved to IL to be closer to family. Renzo is lovingly remembered for many things including his favorite sayings, frequently spoken in Italian or Furlan (his first 2 languages!) as a proud Italian-American. Renzo was a devoted husband, father and grandfather. He taught all who knew him about integrity and justice, fairness and honesty. His devotion to his family and country will forever be remembered by those closest to him. If you would like to honor Renzo by making a charitable contribution in his name, please consider donating to two of his favorite organizations: The Father Fred Foundation (https://www.fatherfred.org/) WIAA 88.7FM (https://www.interlochenpublicradio.org/) The family wishes to thank the staff of Village at Victory Lakes Franciscan Care, Lindenhurst, for their loving care of Renzo in his last months.

The family of Renzo Azzano created this Life Tributes page to make it easy to share your memories.

Renzo “Rene” Azzano passed away quietly at his home in Lindenhurst,...

Send flowers to the Azzano family.