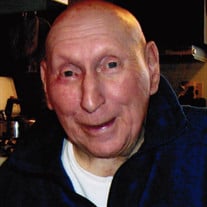 Richard Karst, age 94 of Lindenhurst, Il., passed away on Wednesday, July 25, 2018. Richard was born in Chicago to Henry and Florence Karst nee Croat, and spent most of his life on the northwest side of Chicago. He graduated from Schurz High School in Chicago, where he was affectionately known as "Buttercup" and was voted "Friendliest" by his senior class. Richard fought bravely in the European Theater during WWII, where he received the Bronze Star. After the war, Richard began a 35+ year career with the CTA. He met his future wife Dolores on a blind date, marrying in December 1950. This marriage was to last 66 years, during which time they raised 5 children. Richard was active in several organizations, including the Good Counsel Fathers' Club, and the National Timberwolves Association. He served for many years as district vice president for this WWII group. Richard was also fortunate enough to participate in an Honor Flight. Richard and Dolores moved to Lindenhurst about 13 years ago. He enjoyed travelling, eating out, reading, shopping, and playing the organ. Rich was also an avid Cubs and Bears fan. He was a very generous person who was always ready to help. He will be missed. He is survived by his daughters Anne (Steven) Borchardt, Diane (George) Ancona, Rosemarie Karst and Barbara (Dennis) Kelly; grandchildren Amanda (David) Zhu, Cindy Borchardt, Timothy Borchardt, Tiffanie (Jason) Dargenio, Tracie (Steven) Padal, Kristen (David) Rotsch, Brian Kelly, Kevin Kelly and Erin Kelly; great grandchildren Bruce Zhu, Dylan Padal, Matthew Rotsch and Liam Rotsch; step brother James (Susan) Brink; sister-in-law Marge Fairbanks and many nieces and nephews. Richard was preceded in death by his wife Dolores; his parents; son Richard (Sharon) Karst; granddaughter Kathryn Borchardt and infant sister LaVerne. Visitation will take place on Monday July 30, 2018 from 4 – 8 pm at Ringa Funeral Home, 122 S. Milwaukee Ave., Lake Villa, IL. Prayers will begin on Tuesday July 31, 2018 at 9:30 am from the funeral home and proceed to Prince of Peace Church for Mass at 10:00 AM. Burial will be at Acacia Park Cemetery in Norridge following mass.

Richard Karst, age 94 of Lindenhurst, Il., passed away on Wednesday, July 25, 2018. Richard was born in Chicago to Henry and Florence Karst nee Croat, and spent most of his life on the northwest side of Chicago. He graduated from Schurz High... View Obituary & Service Information

The family of Richard Karst created this Life Tributes page to make it easy to share your memories.

Richard Karst, age 94 of Lindenhurst, Il., passed away on Wednesday,...

Send flowers to the Karst family.