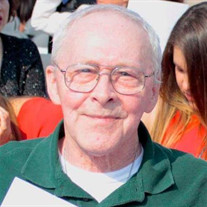 Richard L. McCauslin, age 72 of Lake Villa, IL, passed away unexpectedly on Wednesday, February 14, 2018. He was born to Gloria and the late Robert McCauslin in Chicago, IL, on November 22, 1945. Richard was a proud member of the United States Marine Corps, serving three tours during the Vietnam War. He was a recipient of the Bronze Star Medal for his service during the years of 1970 to 1971 and was awarded two Purple Hearts. Richard was undoubtedly an excellent father, loving husband, caring big brother, and fabulous uncle. He was kind and giving, often going out of his way to help any and everybody, especially his children. He made sure to attend any event he could so he could be supportive as possible. Richard “Uncle Icky” cared for his nieces and nephews as if they were his own. He was an animal lover, a sportsman, and a big Green Bay Packers fan. As a military history buff, he was a walking encyclopedia of history facts and knowledge. Richard was an avid collector of guns and knives, with a special ritual of gifting everyone who becomes family their first knife. He is survived by his dear wife Cheryl of 38 years, sons Jason (Elizabeth) Mauro, Jeffery (JoAnne) Mauro, and Kevin (Anna) McCauslin; grandchildren Jacob, Athena, Cora, Ingrid, and Edith; sisters Roberta (Herb) Samme, Donna (Fred) Scholpp, Kathi (Don) Bandur, and Candy Lawson; and his many nieces, nephews, great-nieces, and great-nephews. Memorial visitation will be held on Wednesday, February 21, 2018 from 5 to 8 pm at Ringa Funeral Home, 122 S Milwaukee Ave, Lake Villa, IL 60046. The service will begin at 7:30 pm with a military honors to follow. In lieu of flowers, memorial contributions may be made directly to the family.

Richard L. McCauslin, age 72 of Lake Villa, IL, passed away unexpectedly on Wednesday, February 14, 2018. He was born to Gloria and the late Robert McCauslin in Chicago, IL, on November 22, 1945. Richard was a proud member of the United States... View Obituary & Service Information

The family of Richard L. McCauslin created this Life Tributes page to make it easy to share your memories.

Send flowers to the McCauslin family.