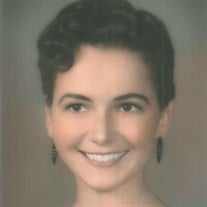 The angels have gathered near your side; your son Douglas was there as well. The time had arrived, and your eyes were looking upward. Where Jesus held His outstretched arms, it was time to say good-bye It’s good-bye dear Ruth, until we are reunited in heaven again. We struggled with our selfish thoughts for we wanted you to stay So, we could walk and talk again Like we did…. seemingly yesterday But Jesus knew the answer and we know he also loved you so, So, we gave you life’s greatest gift, the gift of letting go. Now my heart will carry memories of the love you gave to me Until we meet again in heaven, where the best is yet to be. The sun may never shine as brightly nor the stars twinkle with quite the same brilliance since Ruth Audrey Williamson Larkin went to live with her Lord and Savior, Jesus Christ. Ruth passed quietly, early in the morning of February 9, 2022. Ruth will always be remembered as a beautiful, warm, caring, daughter, sister, wife, mother, grandmother, and friend who will dearly be missed. Ruth is survived by her loving husband of 60 years, Donald Patrick Larkin, who was at Ruth’s side as she passed. Sons David Larkin, Dwight Larkin (Renee), daughter-in-law, Lisa Larkin (Doug). Grandchildren Audrey Larkin, Ryan Larkin, Connor Larkin, Grace Larkin, Quinn Larkin and Alex Larkin. Ruth was preceded in death by her mother, Laura Williamson Brower, Father Hugh Williamson, sisters Beatrice Gray, (Bob) Barbara Maycock (Ted) Shirley Wilson (Harold) and Ruth’s youngest son Douglas Larkin. Ruth was a graduate of Watervliet High School where she graciously served as a prom queen. Ruth had a beautiful soprano voice and was always happiest singing. Ruth was a long-time member of the 1st Presbyterian Church of Deerfield, Illinois, and if you sat on the pulpit side of the church, about halfway back, you knew her beautiful voice well. We would not consider Ruth a sports fan, but through her three sons, she logged hundreds of hours at numerous baseball diamonds, hockey rinks, soccer fields. She was an enthusiastic supporter of her boys, suiting up herself on rare occasions, a most graceful force to be reckoned with in helmet, stick, pads, and of course figure skates. Professionally, Ruth was at the forefront of what is now called radiology, and at the time was known as nuclear medicine, studying at the University of Rochester (Michigan), as an Applied Heath, R.T. (Radiological Technologist). Ruth went on to serve as an X-ray technician at Presbyterian St Luke’s Hospital in Chicago, Illinois, the same hospital where her three sons were born. Ruth and Donald were happily married on August 25, 1962, in Troy, New York. Ruth was the warmest and kindest woman you could ever know and had the rare quality of never saying a bad thing about anyone, ever. Her kindness was infectious, and to know Ruth was to understand what trust, unconditional love, and kindness really were. Ruth will be dearly missed, and never forgotten. A memorial gathering will take place from 11 a.m. to 1 p.m. on Friday, February 18, 2022 at Ringa Funeral Home, 122 S Milwaukee Ave. Lake Villa, IL 60046.

The angels have gathered near your side; your son Douglas was there as well. The time had arrived, and your eyes were looking upward. Where Jesus held His outstretched arms, it was time to say good-bye It&#8217;s good-bye dear Ruth, until... View Obituary & Service Information

The family of Ruth Audrey Larkin created this Life Tributes page to make it easy to share your memories.

The angels have gathered near your side;
your son Douglas was...

Send flowers to the Larkin family.