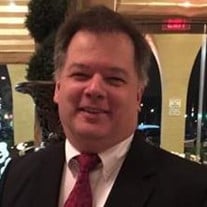 After a hard-fought battle with cancer, Stanley Mrozinski died peacefully and surrounded by family at Aurora Medical Center on July 23 rd , 2017 in Kenosha, WI, at the age of 53. Stan is survived by his wife, Laurie Mrozinski; his mother, Barbara Mrozinski; his mother-in- law, Lenora Mintun; his sons Jon, Michael, and Marc Mrozinski; his daughter-in- law, Lamise Shawahin; and his grandson, Yaseen Mrozinski-Shawahin. He is preceded in death by his father, Bolesław Mrozinski, and his father-in- law, Jack Mintun. Stan was born on October 5 th , 1963 in Chicago, IL. He met Laurie Mintun while both of them were beginning their undergraduate studies at Illinois Institute of Technology. They married in 1982 and welcomed their three children into the world over the next twelve years. A proponent of lifelong learning and also a lifelong learner himself, Stan earned a bachelor’s degree from DePaul University in 2003 and a master’s degree in business administration in 2008 from Lake Forest Graduate School of Management as well as several other certifications along the way. He encouraged and supported his wife and children in their educational pursuits and took pride in their accomplishments. Stan was a driven professional with a commitment to excellence in his chosen field of information technology. He brought his energy and talents to a variety of companies over the years, helping them develop IT infrastructure capable of meeting changing business needs. Stan learned to play the piano as a child and nurtured a love of music for the rest of his life. He was enthusiastic about cars and took great pride in having overhauled his very first car, a Chevy Nova, as a young man. He was an admirer of the art and architecture of Frank Lloyd Wright and made happy memories visiting Taliesin in Spring Green, WI with his wife. Stan was determined to survive beyond his cancer. His family honors his struggle, mourns his loss, and finds comfort in his peace. He will be dearly missed by those who love him. Visitation will be 4 - 8 p.m. on Wednesday, July 26, 2017 at Ringa Funeral Home, 122 S. Milwaukee Ave. Lake Villa, IL 60046. An additional visitation will be 9 - 10 a.m. on Thursday, July 27, 2017 at Ringa Funeral Home with the funeral service at 10 a.m. A procession to Holy Name Cemetery in Wilmot, WI will follow.

After a hard-fought battle with cancer, Stanley Mrozinski died peacefully and surrounded by family at Aurora Medical Center on July 23 rd , 2017 in Kenosha, WI, at the age of 53. Stan is survived by his wife, Laurie Mrozinski; his mother, Barbara... View Obituary & Service Information

The family of Stanley Mrozinski created this Life Tributes page to make it easy to share your memories.

After a hard-fought battle with cancer, Stanley Mrozinski died...

Send flowers to the Mrozinski family.