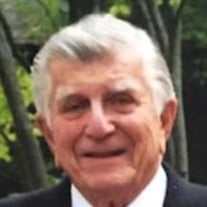 Not sure what to send?

William J. Nemanich of Lake County, Illinois passed away on April 19, 2022. He was born in Joliet, Illinois on September 28, 1927. His parents were Joseph J. and Anna Nemanich who, along with brother Joseph and sisters Irene and Audrey, predeceased him. He was a long-time resident of Lake County and spent many winters in Dunedin, Florida. He was a 1945 graduate of Waukegan Township High School. He attended Loyola University and the University of Illinois receiving his law degree in 1951. Admitted to the Illinois Bar in June 1951, he practiced law in Lake County from 1951-1987. He retired to live in Florida and Green Lake, Wisconsin. He was elected and served eight years as Treasurer of the City of North Chicago from 1953-1961. He was married in 1956 to Mary Lou Brenton and enjoyed 52 years of marriage until her death in 2008. William is survived by his seven children Robert (Sue) Nemanich, Cathy (Bill) McNulty, Paula (Chuck) Hyatt, Thomas (Roxanne) Nemanich, Ann Marie Nemanich, John (Maureen) Nemanich, Judy (John) Bernhard, fourteen grandchildren, three step-grandchildren, and ten great-grandchildren. He is also survived by his sisters-in-law Vivian Nemanich, Phyllis Matheson, and Dolleen Brenton; brother-in-law George Olson; and many nieces and nephews. Throughout his life, his first priority was his family. He spent many happy days partaking in his children’s school and recreation activities. His children remember the spirited softball, football, ping-pong and lawn-jarts games at their home in Waukegan, patiently being taught to waterski while he drove the boat in Green Lake, Wisconsin and the marathon family Hearts games where he shared his passion for the game of cards. He loved to play bridge and continued to play a good game against top players to his last days. He played golf until he was 85 when bad knees told him to quit. He played softball in Florida in the Sixty and Over League for 15 years until he was 75. At the age of 91, he still fiercely competed in the game of cornhole against younger opponents. He was active in Catholic parishes in which he belonged, devoting his efforts to fundraising drives, serving as lector at mass, and working at food kitchens which served the public. He was active in drama groups and loved to perform before live audiences. He was also active for many years in the Waukegan City Club serving one term as President. He was one of the last members of the Waukegan Pool Peers. Visitation will be 9 – 10 a.m. on Friday, July 1, 2022 at Prince of Peace Church, 135 S Milwaukee Ave. Lake Villa, IL 60046, followed by Mass at 10 a.m. Burial of the cremated remains will follow at Ascension Cemetery in Libertyville, IL. In lieu of flowers, please make a donation to the Society of St. Vincent De Paul at https://interland3.donorperfect.net/weblink/weblink.aspx?name=E135450&id=21 or St. Jude Children's Hospital at www.stjude.org/donate/donate-to-st-jude.html in William's memory.

William J. Nemanich of Lake County, Illinois passed away on April 19, 2022. He was born in Joliet, Illinois on September 28, 1927. His parents were Joseph J. and Anna Nemanich who, along with brother Joseph and sisters Irene and Audrey, predeceased... View Obituary & Service Information

The family of William Nemanich created this Life Tributes page to make it easy to share your memories.